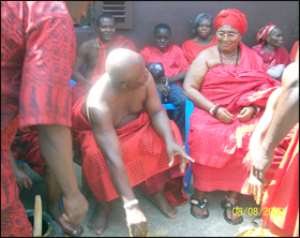 Information available from the four royal ruling houses of the Ga State indicates that the accredited Kingmakers and elders of Ga Paramount Royal Stool, will soon make a decision as to who becomes a new Ga Mantse after the demised of a substantive Ga Mantse, Boni Nii Amugi Sroosi II in December 10, 2004.

The intended decision, this paper gathered would go a long way to end the agitation of the feuding factions claiming the ownership of the Ga Paramount Royal Stool of the Ga State.

This according to sources, follows the final ruling at the Greater Accra Regional House of Chiefs-Dodowa which declared that the Ga State is without a properly installed Ga Mantse (Chief).

The Ruling which was intercepted by this paper stated that, "The Four Royal Ruling Houses, That is Abola Piam, Teiko Tsuru We, Amugi We and Tackie Commey We should put their house together to do the right thing."

The situation this paper learnt has compelled the kingmakers and the Ga Dzaase Council to stake their grounds ready to install a new Ga Mantse so as to put to rest the many blunders and slurs casted by some people they described as "opportunists" on the Ga Stool.

However, this paper was informed that Ghanaians and the indigenes of the Ga State in particular are all anxiously waiting for this decisive move, as the kingmakers are struck by a serious dilemma in nominating the legitimate candidate who will help turn the chieftaincy fortunes of the Ga State.

Sources close to Ga Paramount Royal Stool disclosed to this paper that the choice for the Ga Mantse ahead of this year's Homowo will come out of four names.

George Nii Adama Tackie-Abia, Henry Nii Ayitey Aryeetey, Kelvin Tackie Nii Kuja Okine, according to sources are the four persons from the Aropong Division of Abola, shortlisted to be screened for the position as Ga Mantse.

Sources have confirmed to this paper that the choice of a new Ga Mantse would “certainly come from this shortlist, as the four gentlemen are those the kingmakers and wolomoi of Ga Paramount Royal Stool have been considering for some time now.

Information is that, the Ga Dzaase Council, a well constituted body formed to oversee the nomination and installation of the Ga Mantse, will screen these four personalities for the position.

But sources close to the Djaase (Kingmakers) and Wolomei are pointing one Kelvin Tackie from the Akropong Division-Accra of the Nii Tackie Tarwiah lineage as the legitimate candidate and fit to be enstooled, as the new Ga Mantse, spyghana.com can report.

A highly-placed source close to the Ga Paramount Royal Stool told Today that Kelvin Tackie is the grandson of the late Ga Mantse, Boni Nii Amugi Sroosi II who died in December 10, 2004.

The nomination of the new candidate, this paper sorties at the Ga Paramount Stool revealed was done without the notification of the self-imposed chief, Nii Tackie Adama Latse II whose legitimacy was heavily disputed.

The nomination of Nii Tackie brings to three, the number of persons that have made claims to the position of the Ga Mantse in recent times including Nii Tackie Oblie II (Nii Ayitey Canada) and Nii Tackie Adama Latse II (George Tackie) who was installed some years ago.

It is on record that the Chief Priests (Wolomoi) of the Ga state made an official request to the kingmakers of the Ga Paramount Royal Stool to nominate a "legitimate” candidate from the Akropong Division-Accra of the Tackie Tarwiah lineage to be enstooled as the new Ga Mantse.

Upon the request, the sources hinted that, the kingmakers in consultation with the nominal Head of the Ga Paramount Royal Ruling House, Teiko Tsuru We nominated a grand-son of the late Boni Nii Amugi Sroosi II for the position of a Ga Mantse and presented him to Ga Paramount Royal Stool Dzaase.

And the candidature of the new Ga Mantse this paper was told would be announced to the public at a press conference slated for Friday April, 24, 2015 in Accra.

According to sources, when the Ga Paramount Royal Stool Djaase finishes his work on the candidate, the Ga Djaase and Kingmakers would present him to the Ga state for the final installation and out-dooring as the substantive Ga Manstse of the Ga State.

However, the sources intimated that, the enstoolment of another chief for Ga state would bring about another chieftaincy dispute which could derail the development of the Ga state.

The situation, this paper understands has generated tension within the Ga state.

Sources warned that “chieftaincy-related disputes remained the most serious threat to political stability, peaceful co-existence, and human development in the country. Any individual who attempts to sow a seed of discord in the Ga state will live to regret.”

Meanwhile, the feuding faction of Nii Adama Latse, the sources hinted, had warned the supporters of the new candidate not to do anything that could destabilize the Ga state.

"We hear that, the man who calls himself the new Ga Mantse is being backed by some powerful people in the Ga state.

"...this is because we hear that, the man will be escorted by some National Security operatives," some youth who are close to the embattled Nii Adama Latse II asserted.

The youth who were furious about the development called on President John Dramani Mahama, National Security, Police, Bureau of National Investigations (BNI) Minister of Interior, Inspector General of Police (IGP) and the Military to be on alert and ensure that nothing untoward happens in the Ga State.

The sources further noted that, none of the self-acclaimed men (Nii Adama Latse II and Nii Tackie Oblie II) was officially proclaimed as the chief of the Ga state.

this paper's findings, nonetheless revealed that, Adama Latse II was out-doored at the Ga Mantse Palace at Kaneshie in the Greater Accra region, where a self-acclaimed Dzaasetse, Nii Amarkai III, proclaimed him as the apparent heir to the throne of the Gas state without the knowledge and consent of the Ga Traditional Council.

By the Gas custom and tradition, the sources indicated that, it is only Dzaase who has the power to hand over whoever would be nominated as the Ga Mantse to the Ga State.

Have Confidence In Me, I'm An Honest Leader — Akufo-Addo
18 minutes ago