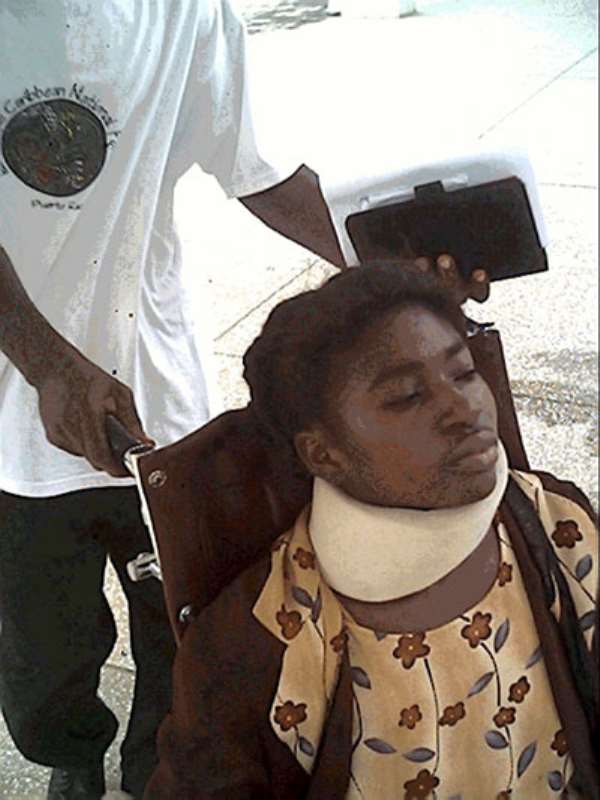 PIC: Picture Shows Mavis being pushed to have her head and neck X-rayed The Minister of Interior, Hon. Hackman Owusu Agyemang has denied that his bodyguard assaulted Miss Mavis De-Graft Turkson, as reported in last week's edition of this paper.

In a rejoinder to The Lens the Minister said, "My information, confirmed by my driver, is that Mavis tried to escape from the custody of my bodyguard, which led to a scuffle, but she was not manhandled in anyway. This was on Wednesday night."

The Minister, in an effort to deny that he blasted the Police for releasing Mavis without first contacting him, said, "In the evening of the following day, Thursday, 5th august 2004, when I went to the station to ascertain the state of affairs, I realized that Mavis had been granted bail earlier in the day without any recourse to me, the complainant, whatsoever," and added that, "I felt slighted by this conduct of affairs and told the officer in charge that, the least I expected was for them to give me prior notification of her release. At least, it would have saved me from going over to the station. I did not shout or threaten anybody, as your story maliciously stated, because there was no need to."

Hon. Hackman Owusu Agyemang claims that The Lens publication said that, "over the weekend, neither my bodyguard nor myself were in Accra and therefore my bodyguard could not have beaten the girl on the Saturday as it was alleged in your report. This is clear and simple."

The Minister accused The Lens of deliberately omitting the fact that the missing rings were retrieved from Mavis, stating that "I find such selective reporting in bad taste, unprofessional and only calculated to damage my reputation."

The rejoinder said, "retraction and an apology of the story within the shortest possible time and not later than 25th of August 2004. Failure to do this will leave me with no option than recourse to the law." Read full text of the Minister's rejoinder below.

For starters, we wish to let it be known to the Hon. Minister that we welcome, indeed cherish, the opportunity to meet him before the law over this matter, as in our considered opinion he is not deserving of an apology from us, let alone a retraction of the said story, either in part or in full. Indeed, as far as we are concerned, he is not in a position to make any demand whatsoever on us.

Either the Minister misread our publication or he has deliberately set out to misrepresent our publication. Nowhere in the said article was it remotely suggested that the assault on Mavis took place over the weekend as the Minister seeks to make the world believe.

The article quotes Mavis thus, "On our way back to the Minister's residence, the bodyguard called the Minister and I overheard him telling the Minister that when they searched my house they did not find the ring; after that the bodyguard spoke in such a way that I was unable to hear even his side of the conversation. After speaking on the telephone, the bodyguard turned to me and started beating me up while ordering me to admit that I stole the ring," Mavis recounted.

Mavis' narration is clear, the assault on her took place on the day she was searched by the bodyguard. Not later, and definitely not over the weekend.

Secondly, and to be fair to the Minister, we believe he can not be aware of the fact that when the bodyguard took Mavis to her parent's house, she was left outside the house, all by herself, while the bodyguard, the driver and Adelaide went in to search the house. There are living people who saw her standing outside her parents' house that night.

We find it rather interesting that Mavis did not try to abscond then, but would rather try to abscond after the search had been conducted and nothing incriminating found. At which point of the journey back from her parents' house did she try to abscond? On whose orders did Acheampong, the driver of the vehicle pull the vehicle to a stop?

We find it rather puzzling that the Minister's claim that "a scuffle, but she was not manhandled in anyway" could result in so much harm to Mavis that Police personnel on duty at both the Airport Police and the Madina Police stations would be reluctant to accept her into their custody and would only accept her after they were told that the Minister of Interior was the complainant in the case.

We thank God that the Minister at least concedes that, "I felt slighted by this conduct of affairs and told the officer in charge that, the least I expected was for them to give me prior notification of her release." Our question to the Minister is, are the Police required to "give prior notification" to a complainant in a case, no matter who, or how important, wealthy or powerful, he/she may be, before a suspect is released on bail?

In as much as we do not want to be sidetracked by arguments about the ring, as we consider this a human rights issue, we want to make it clear that the rings were found in polythene bag that Mavis had given to a friend for safe-keeping is a total fabrication Has the Police obtained a statement from this friend to that effect?

The truth of the matter is that on Saturday 7th August 2004, when Mavis discovered the rings among her things, the very things that had previously been searched in the Minister's house, she showed it to her father and told him that she did not know how the ring came to be among her things and that she suspected that it was clearly an attempt to frame her up.

Even though Mavis had been badly beaten by the Minister's bodyguard and she was having difficulty walking, she insisted that she would accompany her parents to the Airport Police station so as to give the rings to the Police. Thus it was Mavis and her parents, in the company of her brother, who returned the rings. The question is why would they return the rings if indeed she stole them, after she had been searched and brutally beaten?

For the Minister's information, the said friend did not go to the Airport Police station with Mavis and her parents on that day. As a matter of fact, the friend's name only came up after Mavis had returned the rings to the Police and the Police informed her, in the presence of her parents and brother, that the Minister had telephoned the Police earlier to complain that he had discovered the loss of his own wristwatch, and that they would have to conduct a further search of Mavis' belongings.

It was then that Mavis volunteered the information that she has some things with a friend of hers. However, as the Police claimed that there was no vehicle to take them to the friend's house, and Mavis and her parents said they could not afford the cost of hiring a taxi cab to convey them to the friend's house, Mavis' father called the said friend on her fiancé's cell phone and asked her to come to the Airport Police station.

As we have stated earlier, our concern is not who stole or did not steal. Our concern is the gross abuse of Mavis' rights, and we believe that all right thinking persons should join the crusade to ensure that this matter is not swept under the carpet as usual.