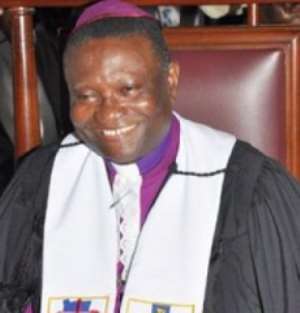 The Bishop of the Sekondi Diocese of the Methodist Church, Rt Rev Edward Ofori Donkor has called on the government to appropriately set its priorities.

He stressed the need for government to reduce funding of certain sectors of the country's economy and invest massively in the energy sector to tackle the power crisis.

He explained that the current power crisis, which is also known as Dumsor, had negatively affected all Ghanaians

According to the Methodist Bishop, people were dying because of Dumsor and there seems to be no solution to the problem.

He said it was prudent for the government to give Ghanaians constant power supply than to build airports since nobody would die as a result of the lack of airports throughout the country.

'In order to solve the problem, the only thing we could do as a nation was to create another ministry, Ministry of Power.

“For me, the problem is lack of funds and this was confirmed by the president when he said the meat has been consumed and we are left with the bones,' Bishop Ofori Donkor noted.

'It is better to build 50 community schools than to borrow money to build 200 schools when dumsor is still staring us in the face.

'It is better to build 10 well equipped hospitals in all the regions instead of 50, when we do not have money to buy crude oil,' the Bishop stressed.

'It is better to pay teachers and doctors well to take good care of students and patients than putting millions of cedis into SADA and GYEEDA again after wasting the country's resources in an abysmal manner.

Rt Rev Ofori Donkor, who stated this at the 54th Synod of the Sekondi Diocese of the Methodist Church on Thursday, could not fathom why uncompleted affordable houses had been abandoned while new ones were being built.

He stressed that the church was concerned about national issues relating to governance and not party politics and called on Christians, politicians and workers to oppose evil forces in the country.

School Feeding
The Methodist Bishop stressed that the School Feeding Programme must be examined again, adding 'I have been to some basic schools where children are being fed diet which parents hardly give to their children at home.'

He asserted that some of the children were also being fed in schools where there were no books, chalks, capitation grant, tables and chairs adding that 'they lack logistics for quality education.'

He mentioned that parents do not need free meals for their children but quality education that would enhance their children, stressing that Ghanaian children need educational materials and not substandard food.

Rt Rev Edward Ofori Donkor urged all members of all faiths not to tolerate fanatics and extremists all in the name of human rights and tolerance.

'As much as we all agree that no one can be forced into another religion, we must be careful not to create confusion and disorder in our institutions,' he added.

He emphasized that in spite of the disenchantment in the country, there was the need for the people to continue to pray and support government initiatives that would benefit the citizenry.