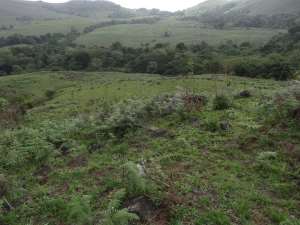 There are places God himself designed to be beautiful. Kom is one of them.

History says only the Kom Kingdom resisted German colonizers in bloody battles lasting nine months and ending with the capture and beheading of the German commander.

of caves from which the local soldiers appeared to ambush the Germans and disappeared again with rock-rabbit speed. The Reich ordered his troops out and named Kom the African Kingdom.

These proud people have maintained their solidarity around the Foyn in Laikom, the seat of Kom leadership, perched on one of the highest and rugged mountains. A real natural defense with nothing to envy the Great Chinese Wall.

Hansen’s disease was the only thing flashing through my mind whenever the name Kom was mentioned. American Baptists set up a leprosarium to cure leprosy in Mbingo (a natural isolation) quarter of Kom in 1952.

Afraid of the dreaded condition, the King of Kom, in a cautionary decision, decided that the hospital be located far from his people, where not even air could blow the dreaded condition back to his land. He was also afraid the lepers had the effrontery to share the wives of the clean Kom people. The same fear was shown when Kom was proposed as an administrative center in the grass field of Cameroon.

Kom Mountains, in their thousands qualify to be among the world wonders as they surpass anything in beauty and firmness. Made from igneous rocks, they stand like phantasmagoric battlements, ready to protect some gods and goddesses. And the gods of mystery abound in Kom.

“I first came to Mbingo in 1972. After my training as a medical doctor, I settled here. Today, I am a grandfather and all my children are back in the USA. I cannot force myself to leave this beautiful Kom land.” Said Pa Palmers, an Internist working at Mbingo Baptist Hospital.

Truly, Kom has a charm. Most former lepers have settled in the lovely valleys and hills that make up Kom land. They are glued to the land and not ready to return to their homeland like Dr. Denis Palmers.

Driving to Fudong could be breathtaking for the first time visitor. The macadamized road curls round the hills like a boa constrictor.

You could hear the tires of your vehicle screech as you negotiate the hundreds of bends in the road. Vehicles will wind their way up and down the mountains like a weaver in a complex design trying to craft a mazy pattern on raffia bags.

The landscape is complex, and this has produced some of the most convoluted characters of all times.

I paused in Njinikom and curtseyed at the home of the political juggernaut, Bobe Francis Nkwain. Not being able to identify the home of Bobe Francis Yong, the other Kom Francis, I reserved the honour for one of his educational edifices.

As a young man, I was marveled by the mystical feats of the Afoakom statue that was stolen from Kom and taken to a Western museum. It is alleged Afoakom would change his position at night and would make water in the museum. It was finally repatriated and restituted to the Kom Fondom.

The Kom landscape is a natural piece of art waiting for celebration.