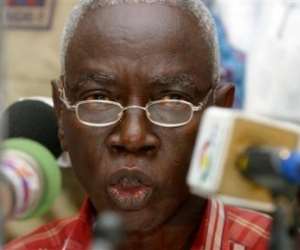 The Committee was established to make and recommend changes to the nation's electoral system.

'We would however want Ghanaians to note that the Commission would not hesitate to adopt recommendations which can work,' he added.

Dr Afari Gyan said this on Friday when the Committee submitted its final report to the EC for study and for possible adoption.

He said although he is yet to study the final report, he expressed the hope that the recommendations, which would be adopted by the EC, would help bring the needed changes that would be acceptable to stakeholders.

'We will ensure that those aspects which are administrative would be looked into carefully whereas referring the legal ones to the appropriate authorities to look into them.'

He said contrary to people's perception, the Supreme Court did not issue orders to the EC to set up an Electoral Reforms Committee, but rather recommended it to the Commission.

He assured Ghanaians that the EC would take its time to study the report carefully and inform Ghanaians on decisions which would be taken on the recommendations of the Reform Committee.

He said the report in itself is not a finished product and would therefore not be able to disclose its content to the stakeholders or make copies available to them.

'I am not even aware of what is in this report and will have to study it before I can comment on it', he added.

He indicated that although he would retire very soon and might not be able to dig deep into the report, he expressed the hope that whoever would take over from him would continue from where he left of as far as the reforms are concerned.

Ms Georgina Opoku Amankwaa, Chairperson of the Committee, said the body was made up of representatives of political parties, the EC, and civil society organisations.

She expressed satisfaction with the level of consensus and cooperation she received from the members, especially the two main political parties for their decisions to come to consensus on critical matters such as how to handle issues like over voting, and verification.

Ms Opoku Amankwaa, who is also a Deputy Director at the Electoral Commission, expressed her appreciation to the Institute of Economic Affairs (IEA) for its assistance to the Committee.

In an interview with the Ghana News Agency, Mr Johnson Asiedu Nketiah, General Secretary, National Democratic Congress, cited the immediate prosecution of electoral offenders, and coming out with a clearer meaning of what over voting is as some of the recommendations the Committee made to the EC.

'We also recommended that although, the issue of electronic voting is good, it should be studied very well and must not be adopted for our 2016 general election until we have gotten all its appropriate requirement in the country,' he added.

He said the political parties were also of the view that the adoption of 'No verification, no vote' should still stand.