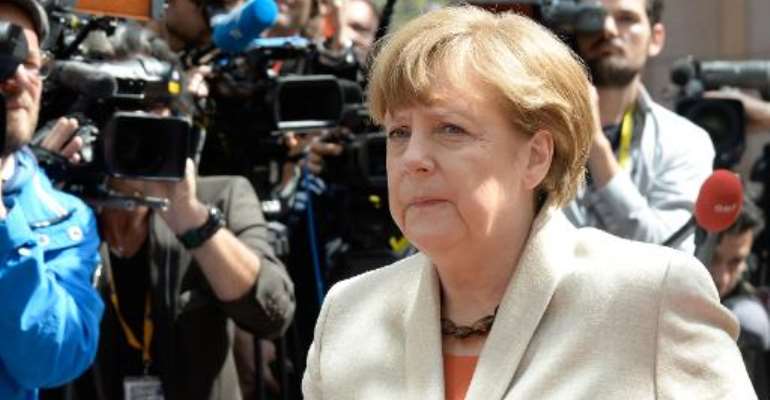 Germany's Chancellor Angela Merkel arrives at the European Council headquarters for an extraordinary summit of European leaders to deal with a worsening migration crisis, on April 23, 2015 in Brussels. By Thierry Charlier (AFP)

Brussels (AFP) - EU leaders agreed Thursday to triple the funding for the bloc's search and rescue operation in the Mediterranean in a bid to curb the soaring number of migrants dying as they seek a better life in Europe.

As horrific details continued to emerge from the survivors of last weekend's shipwreck that saw hundreds of men, women and children drown in the Mediterranean's worst migrant disaster, the heads of state also took a step closer to military action against the people smugglers.

European Council chief Donald Tusk said leaders had tasked EU foreign policy head Federica Mogherini to "propose action in order to capture and destroy the smugglers' vessels before they can be used."

But leaders failed to agree on concrete action over the sensitive issue of what to do with migrants once they land on European shores.

"I had hoped we could have been more ambitious but that was not possible," EU Commission chief Jean-Claude Juncker said at a post-summit press briefing.

Ahead of the high-profile gathering, poignant events had taken place in Malta and Brussels to try and highlight the tragic, human dimension of migrant shipwrecks.

Already, more than 1,750 migrants have died crossing the Mediterranean this year -- 30 times more than the same period in 2014.

Malta honoured the more than 750 victims of last weekend's shipwreck with an inter-faith funeral service -- the wooden coffins of 24 of the dead laid out on a red carpet in a tent outside a morgue and then carried away by soldiers for private burials.

Dozens of migrants in Brussels staged a protest near the EU summit venue, attaching pieces of paper with the names of people who had died onto barbed wire put up as a security measure.

"Esther Down, 9 months old, Nigeria, drowned," read one of the signs.

Tusk said tripling resources for the Triton search and rescue operation deployed in the Mediterranean would "enhance its operational capability."

But he added the mission would continue to carry out its mandate as before, going no further than 30 nautical miles from European shores -- far away from countries like Libya where many migrants depart from.

On the issue of migrant relocation, draft proposals seen by AFP before the summit had suggested that member states provide resettlement to 5,000 migrants, but no number was given in concluding remarks.

"We didn't fix a number today because it was our opinion that 5,000 is not enough," German Chancellor Angela Merkel said after the summit.

To discuss the issue further, EU and African Union officials have decided to gather soon in Malta, which like Italy and Greece is one of the countries worst affected by migrant arrivals.

Survivor accounts, meanwhile, continued to trickle in as the full horror of the shipwreck near Libya emerged.

Even before their perilous sea journey, people smugglers beat several migrants to death and killed at least one minor, those who got out alive told investigators.

They said the smugglers operated a reign of terror before taking them by truck to the coast to be ferried by dinghy to the waiting boat.

A boy who climbed on to a dinghy before being told to was killed by the smugglers and his body tossed overboard, one survivor told investigators.

The skipper, Mohammed Ali Malek, 27, was one of the 28 survivors and faces charges of illegal confinement, culpable homicide, causing a shipwreck and aiding illegal immigration.

As he arrived at the summit, Prime Minister David Cameron offered to deploy Britain's flagship HMS Bulwark, three helicopters and two patrol ships to the Mediterranean, but stressed any migrant rescued would not have "immediate recourse to claim asylum in the UK."

Other countries have also offered up ships to enhance Triton's effectiveness.

Hollande, meanwhile, said any decision to destroy the traffickers' ships would have to be in line with international law.

"It can only be done through a resolution of the Security Council," he said.

Experts have questioned the feasibility of a military response to the crisis.

"It's not an easy task to go shoot down boats in Libyan ports," a European source who wished to remain anonymous said.

He pointed out that the radical Islamic State group was in control of parts of chaos-ridden Libya.

"They will be delighted to see European soldiers come to them, they are potentially easy targets."

If the migrant crisis continues unabated, aid groups predict there could be 30,000 deaths at sea this year and Italy will have to process 200,000 migrants landing on its soil.