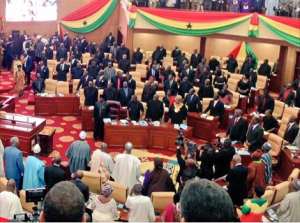 Speaking at a National Quarterly Dialogue organised by the NCCE to discuss the findings of the research, he said parliament was structured to create consensus not to battle the executive.

The spirit of this consensus building mechanism is even displayed in Parliament's horseshoe sitting arrangement, the Nadowli/Kaleo MP said.

MPs are 'not called upon to be at the throat of the executive', he pointed out, noting that the majority of ministers appointed by the President are also MPs.

According to the constitution, parliament cannot make bills or pass a law on its own that will require a charge on the Consolidated Fund.

Citing an example, the experienced legislator said a Bill on funding for political parties prepared by a private citizen “never saw the light of day” because the Executive would not allow it.

Parliament depends on the Executive for funding the work of its committees, he lamented.

'What power is this? They give you with the right hand take with the left', he said, doubting the ability of Parliament to check the Executive.

Referring to the NCCE research, Alban Bagbin said it was fair that s5% of the 2,900 respondents viewed Parliament as performing poorly in serving as a check on the Executive.

Minority Chief Whip Ignatius Baffour Awuah agreed with the Majority leader and the research findings on the effectiveness of Parliament in the execution of its oversight duties.

“It is quite objective, we have to accept it with humility”, the Suyani West MP said.