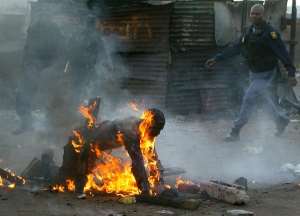 The Christian Council of Ghana has called on the South African government to compensate victims of the recent xenophobic attacks that has claimed at least ten lives.

General Secretary of the ecumenical organisation, Rev. Dr. Kwabena Opuni-Frimpong said in a press statement that a complete rehabilitation system is also needed to support the survivors of the anti-foreigner attacks that started three weeks ago.

Over 5,000 African foreign nationals are reported displaced by the attacks on them and the looting of their shops in South Africa.

"The ongoing attacks are extremely worrying, especially at a time when Africans are seeking to have an integrated, united, sovereign, independent, confident and self-reliant continent through ‘The Africa We-Want-Agenda 2063’ which is currently being championed by the African Union (AU)", the council said.

The attacks, however, seem to have subsided following the deployment of soldiers and police to xenophobic hotspots.

At least 11 arrests have been made.
The Christian Council further said in the statement released on Wednesday that it is deeply saddened by the heinous attacks, adding it is a wake-up call to African leaders to address the real issues of their citizens.

The Council further pleaded with other African countries whose nationals have been affected by the attack not to retaliate by attacking South Africans or their businesses.

"It is our prayer that, the good Lord will have mercy on Africa and unite us in peace, love and prosperity. We also pray for the victims and their families, that God will heal and comfort them in these trying moments in Jesus’ name.

"We admonish everyone with Christ’s prayer for His disciples in John 17:21 which read; 'that they all may be one…'", the council said.