By M A OPPONG 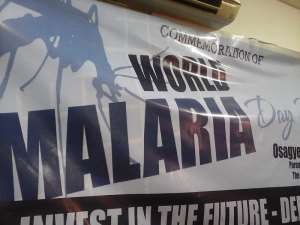 The National Malaria Control Programme (NMCP) would distribute more than 2.8 million long lasting insecticidal nets in the Western and Brong- Ahafo regions through its point distribution mechanism, this year.

The distribution would be part of the activities to mark this year’s World Malaria Day on the theme: “Invest in the Future: Defeat Malaria.”

The day, which falls on April 25, would be celebrated in Takoradi in the Western region.

Mr James Frimpong, Programme Manager of the NMCP, at a media briefing to launch the Day, said malaria is a major contributor to hospital attendance, accounting for about 30 per cent of all Out-Patients Department cases, 27.9 per cent of inpatient cases and 7.2 per cent deaths.

He said the Programme has developed a National Strategic plan for malaria control, spanning 2014-2020 to reduce disease and death due to malaria by 75 per cent by 2020.

Mr Frimpong noted that some of the strategic interventions for the plan include prompt and effective case management, multiple prevention methods, partnership and monitoring and evaluation.

The Programme Manager listed inappropriate care, sickening attitude of some caretakers of children less than five years, high levels of presumptive treatment of malaria and very limited inadequate internal financial resource as some of the challenges facing the programme.

He called on corporate institutions to support the programme to fight malaria.

The programme with its partners distributed 12.5 million nets from 2010-2012 and in 2014 alone, and more than 1.3 million of treated nets through the same mechanism in the Eastern and Volta regions, in the first half of the year.

The national malaria prevalence is 27.5 per cent. The prevalence rates vary from region to region with Upper West accounting for 37.8 per cent, Upper East region; 11.7 per cent, Northern Region; 40 per cent and Brong- Ahafo Region, 26.5 per cent.

Dr Gloria Quansah-Asare, Deputy Director-General of Ghana Health Service, said the country has made significant progress in the fight against malaria over the years.

She commended the media for the support in the fight against malaria control, which is yielding positive results.

She called on the media to continue to support the fight against malaria.