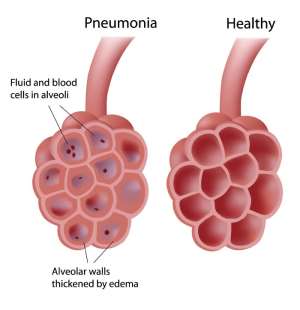 Kumasi, April 22, GNA - A total of 5,399 cases of pneumonia has been recorded in the Ashanti Region within the first three months of this year as against last year's figure of 26,369.

Twelve people died out of last year's total figure with 1,115 admissions, but no death has been recorded this year.

The proportion of children under five out of the 2014 figure of 26,369 stood at 1,725 and no deaths were recorded despite the identification of the air-borne disease as the second cause of death among children in that age bracket.

Dr Joseph Oduro, Deputy Regional Director of Public Health, told Ghana News Agency in an interview that children by reason of their weak immune system are more prone to the infectious disease.

He said the disease causing bacteria is transferred to another person when he or she inhales droplets of an infected person's sneeze, cough, and spit.

'Thus those who live in slums are also the most susceptible,' he added.

Dr Oduro gave symptoms of pneumonia in children as cough, fever and breathlessness, and in adults, chest pains.

He advised parents to visit the hospital as soon as their children start coughing.