What Kind of Analysis Is this, Kofi Ata? 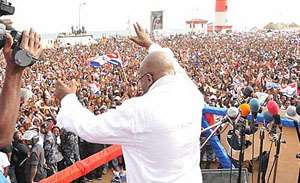 It is typical NDC self-righteousness. I am, of course, talking about Mr. Kofi Ata's article captioned "Was It 'All-Die-Be-Die' Or Afari-Gyan That Caused Akufo-Addo's 2012 Defeat?" Under the specious and scandalous guise of conducting a dispassionate analysis of factors that contributed to the loss of the presidency in 2012, on the part of the main opposition New Patriotic Party (NPP), the Cambridge, UK, Township resident takes the devious liberty to impugn the personality, character and credibility of Nana Addo Dankwa Akufo-Addo (Modernghana.com 4/18/15). Anybody who has sedulously followed my journalistic fare on Ghana's former Justice and Foreign Minister is well aware of the fact that I pull no punches when it comes to laying bare some of the major foibles of Nana Akufo-Addo.

If, indeed, the man who once wrote to the authorities of the college where I have been teaching for the past 18 years to enquire whether I had the right to append my institutional affiliation to my journalistic fare on Ghanaian websites were really interested in knowing the percentage of ballot-rigging that Dr. Kwadwo Afari-Gyan, the country's retiring Electoral Commissioner, contributed to the outcome of Election 2012, Mr. Ata would have thoroughly acquainted himself with both the individual and collective writs of the Supreme Court justices who heard and deliberated on the 2012 Presidential Election Petition, particularly the authoritative pronouncements of Justices Julius Ansah and Constance Owusu.

Then also, Mr. Ata needs to explain why at least one of the judges, not herein named, was widely alleged to have vacillated and contradicted himself several times during the panel's voting on the various categories used for evaluating the credibility of the Afar-Gyan supervised and anchored national electoral contretemps. But even more significantly, the Cambridge, UK, critic would have studied the recommendations made by the Atuguba-presided panel for rendering the country's electoral system and process more transparent and credible, if he was really interested in the stark facts of Election 2012 as he so disingenuously claims. In short, my argument here is that Mr. Ata wrote his article just to take whimsical and capricious shots, and rather cheap ones at that, at Nana Akufo-Addo even while also facilely pretending to be evenhanded in his criticism.

The fact of the matter is that Mr. Ata spent as much time seeking to mordantly discredit and humiliate Nana Akufo-Addo, by writing to Oxford University to enquire whether, indeed, the three-time Presidential Candidate of the New Patriotic Party ever attended that globally renowned academy and, in particular, the circumstances under which Nana Akufo-Addo parted ways with that august institution, as Messrs. Afari-Gyan and John Dramani Mahama deftly and mischievously collaborated in rigging Election 2012 in favor of the latter, the then-Interim President of Ghana. And what was even more remarkable about his missionary "sleuthing" is that Mr. Ata went at it for weeks and months.

And so, really, it cannot simply be that our snake-oil salesman turned Akufo-Addo analyst plenipotentiary and extraordinary in the pay of President Mahama is possessed of any other motive than the patently ignoble and egregious attempt to reprise his trademark tack of the tired politics of the personal destruction and the flagrant defamation of the former New Patriotic Party Member of Parliament for Akyem-Abuakwa South. At any rate, would Mr. Ata also call for Nana Akufo-Addo to calibrate the extent to which the astute and witty first-rate Ghanaian trial lawyer contributed to the widely alleged defecation and urination by the former Political Science lecturer of the University of Ghana in Dr. Afari-Gyan's own pants before a full-court of the nine Supreme Court justices who presided over Election 2012?

You see, the recent Cambridge Township transplant is not nearly half as smart as he supposes himself to be. Then also, what is this nonsense about Nana Akufo-Addo's supposedly holding the destiny of Ghana on tenterhooks for some "eight good months"? Was Nana Akufo-Addo the man who decided the temporal span of judicial deliberations? And did not the aggrieved party reserve the constitutional right to have his grievances and those of the New Patriotic Party promptly and duly addressed by the Wood-presided Supreme Court of Ghana? I shall be addressing the indisputably hoxy contribution of the "All-Die-Be-Die" rhetorical salvo of defiance to the bloody political track-record of the Rawlings-minted National Democratic Congress in a future column; and as well, the alleged incitement to ethnic hatred by Mr. Kennedy Ohene Agyapong - two issues which I have more than adequately examined in the past.