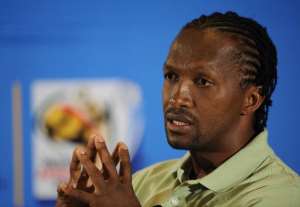 He made an immense contribution to the 1996 Africa Cup of Nations-winning team, creating and scoring goals from the left side of midfield.

Moshoeu was at his irrepressible best in the semi-finals as debutants South Africa crushed four-time title-holders Ghana 3-0 in Soweto.

The master dribbler and clinical finisher opened and closed the scoring in arguably the finest display by Bafana Bafana (The Boys).

South Africa then defeated Tunisia 2-0 in the final before a capacity 80,000 Soccer City stadium crowd in Soweto that included then president Nelson Mandela.

While all the squad were feted for the remarkable achievement, "Shoes", fellow midfielder "Doctor" Khumalo and centre-back Mark Fish were particularly popular among the public.

The success also catapulted football on to the front pages of South African newspapers that had traditionally given scant coverage to a sport played predominantly by blacks.

Neil Tovey skippered the 1996 Cup of Nations-winning team and was among the first to salute Moshoeu.

"'Shoes' was a dedicated footballer. He reminded me of a champion racehorse -- lean and elegant. What he did on the field, he did extremely well."

Lucas Radebe succeeded Tovey as Bafana skipper and went on to captain Leeds United in the 1990s when they were an English top-flight force.

Radebe visited Moshoeu a day before he died, and said he was saddened to find his former team-mate battling for his life.

"When I saw 'Shoes' struggling, I was heartbroken. However, I knew him as a fighter and believed he would pull through.

"He was an exemplary figure on and off the field. He never smoked nor drank and exercised religiously."

Andre Arendse, the 1996 goalkeeper, spoke for many South African football followers when he admitted: "I cannot get my head around this.

"A football legend has left us -- it is difficult to believe someone as endearing as Shoes has gone."

Moshoeu was also part of the national team that created more history by qualifying for the 1998 World Cup in France.

There was to be no fairytale in Europe, though, as a heavy defeat by the Zinedine Zidane-inspired host nation and draws with Denmark and Saudi Arabia triggered a first-round exit.

The biggest surprise of his 73-cap international career was that he scored only eight goals given his dribbling skills and uncanny knack of sneaking unnoticed into scoring positions.

His skills did not go unnoticed and he was among the first South Africans to head to Europe, playing for three Turkish clubs, including the hugely popular Fenerbahce.

After 10 seasons in Turkey, "Shoes" returned to Chiefs and finally hung up his boots playing for third-tier Alexandra United in Johannesburg.

A shy person off the field who shunned the media spotlight, Moshoeu had been in and out of hospitals recently without revealing the seriousness of his illness,

"We dip our banners for the football legend," said sports minister Fikile Mbalula. "Our country is poorer without him."