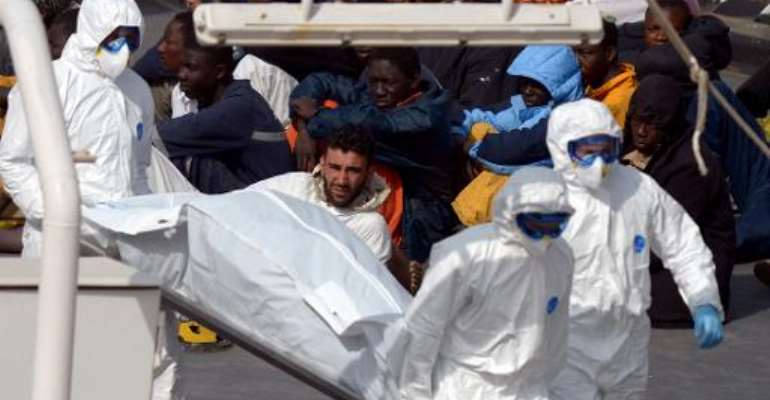 Rome (AFP) - Italy is studying the possibility of mounting "targeted interventions" against Libya-based people smugglers behind a huge surge in the numbers of migrants crossing the Mediterranean, Prime Minister Matteo Renzi said Monday.

"The hypothesis of military intervention (to stabilise Libya) is not on the table... but what is possible are targeted interventions to destroy a criminal racket," Renzi said at a press conference with his Maltese counterpart Joseph Muscat.

"Attacks on death rackets, attacks against slave traders (traffickers) are in our thinking," Renzi said, adding that defence ministry experts were studying all options.

The option of some sort of limited military action aiming to take out or apprehend smuggling kingpins was first raised last week by Foreign Minister Paolo Gentiloni, who said they could be based on the example of anti-terrorist operations carried out as part of the allied campaign against the Islamic State group in Iraq and Syria.

Italy regards the reestablishment of the rule of law and state authority in conflict-torn Libya as key to addressing the migrant crisis.

Rome has said it would be willing to lead an international peacekeeping force in its former colony but only if the warring parties have first agreed to a UN-brokered ceasefire and peace accord.

The chaos in Libya is widely seen as allowing people traffickers from all over north Africa and further afield to operate out of the country with impunity.

The scale of the problem faced by the international community was underlined on Monday when Italy announced the arrest of 24 men suspected of involvement in a sophisticated operation designed to transport migrants from Eritrea, Somalia and Sudan to to northern Europe via Sicily.

Prosecutors in Palermo, the Italian island's adminstrative centre, believe the network had organised at least 15 convoys of migrants since May 2014, charging each individual between 1,500 and 2,000 dollars for the journeys.

Renzi said in his press conference that the arrests took the total number of traffickers arrested by Italy in recent years to 1,002.

An extensive report on the investigation that led to Monday's arrests reveals how the traffickers would assemble their clients in holding centres in Libya before crowding as many of them as possible onto whatever boats they could lay their hands on.

The smugglers rarely attempted to reach Italy's southern islands, opting instead to steer the vessels into open seas before issuing distress calls and then abandoning their human cargo in speed boats, cynically counting on the Italian coastguard or merchant ships to come to the rescue and deliver the migrants to European soil.

The service provided by the traffickers did not stop there. In some cases they also undertook to help migrants get away from reception centres in Italy following their rescue at sea.

At least two out of every three migrants or asylum-seekers who arrive in Italy do so with the intention of heading further north, according to aid organisations.

The investigation also uncovered evidence that the traffickers make extensive use of money transfer services like Western Union and that they were supported by networks of contacts in Italy that operated much like a regular travel agent to organise onward journeys for migrants who made it there.

The individuals arrested on Monday were described by the Italian media as foot soldiers of the smuggling operation.

The two men are also wanted by Italian authorities in connection with an October 2013 disaster in which 366 migrants died after their overcrowded boat caught fire and capsized just off the Italian island of Lampedusa.