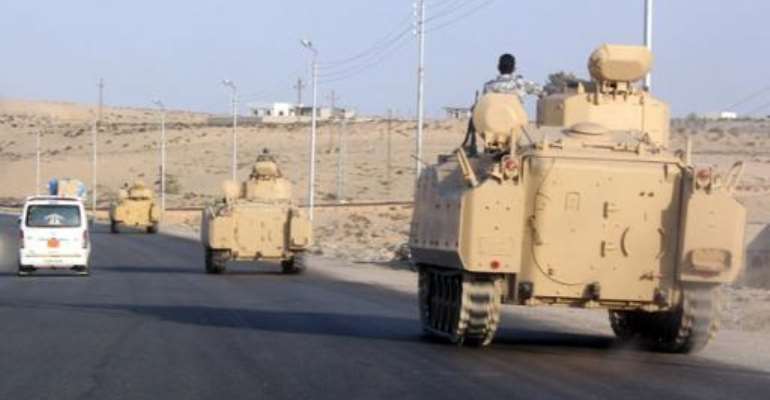 The Egyptian military has poured troops and armour into the Sinai peninsula. By (AFP/File)

The blast struck on the Egyptian side of the divided city of Rafah on the Gaza border, the official said.

"An officer and two soldiers were killed and another soldier wounded when their armoured vehicle hit a bomb in the Tawil al-Amir district," the security official told AFP.

Jihadists who have pledged allegiance to IS, which controls swathes of Iraq and Syria, said they carried out the attack.

"We blew up an armoured vehicle of the apostate army and everyone inside was killed," IS Sinai Province said on its Twitter account.

Formerly known as Ansar Beit al-Maqdis, the group has carried out repeated deadly attacks on the security forces in its peninsula stronghold.

Twin bomb attacks claimed by the group on April 12 killed at least 14 people, 11 of them security personnel.

On April 2, the group launched simultaneous attacks on five checkpoints in the region that killed 15 soldiers and two civilians.

The group says its attacks are in retaliation for a deadly crackdown by the security forces on Islamists since then army chief and now President Abdel Fattah al-Sisi ousted his Islamist predecessor Mohamed Morsi in 2013.

The authorities say more than 500 troops and police have been killed since Morsi's overthrow, most of them in North Sinai province.

The attacks have come despite stringent security measures imposed by the army in the province, including a night-time curfew and the creation of a buffer zone along the Gaza border to prevent militants infiltrating from the Palestinian territory.