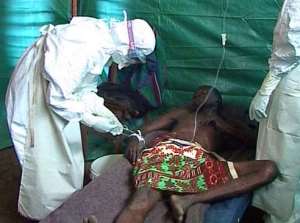 WASHINGTON, April 17, 2015: The World Bank Group (WBG) announced today that it would provide at least US$650 million during the next 12 to 18 months to help Guinea, Liberia and Sierra Leone recover from the devastating social and economic impact of the Ebola crisis and advance their longer-term development needs. The new WBG pledge brings the organizations total financing for Ebola response and recovery efforts to date to US$1.62 billion.

The additional funding announcement comes as the WBG releases newGDP estimates showing that the Ebola epidemic continues to cripple the economies of Guinea, Liberia and Sierra Leone. Estimated GDP losses for the three countries in 2015 rose to US$2.2 billion: US$240 million for Liberia, US$535 million for Guinea and US$1.4 billion for Sierra Leone. In addition to the severe effects of Ebola, the economic downturn in the three countries is aggravated by the sharp decline in global iron ore prices, as well as the collapse of the mining sector in Sierra Leone, resulting in an unprecedented GDP contraction in that country estimated at 23.5 percent.

The new funding is on top of the nearly US$1 billion that the WBG previously committed for the Ebola emergency response and early recovery efforts from IDA (US$518 million) and IFC (US$450 million), and also comes on top of US$2.17 billion in debt relief from the WBG (Guinea, US$1,098.5 million; Liberia, US$464.7 million; and Sierra Leone, US$ 506.8 million), which during 2015-17 will save the three countries about US$75 million annually in debt payments

In line with the countries recovery plans, the five priority areas for the additional IDA funds include: strengthening health systems and frontline care; agriculture; education; cash transfers and other social protection programs; and lifesaving infrastructure such as electricity, water, sanitation and roads. The funds also will be used to develop a regional disease surveillance system across West Africa that will help prevent or contain future pandemics.

Even as we work relentlessly to get to zero new Ebola cases, the international community must help Guinea, Liberia and Sierra Leone jumpstart their recovery and build a safer, more prosperous and resilient future for their people,said Jim Yong Kim, President of the World Bank Group. Many of us have acknowledged that the international community was slow to react to Ebola. Lets show that we have learned this lesson by supporting an effective and sustainable recovery that also prepares these countriesand the rest of the worldfor the next pandemic.

Since the WBG issued its last economic update on January 20, 2015, important differences among the three countries are emerging. The new report finds that Sierra Leone is now facing a severe recession with the potential for an unprecedented -23.5% growth rate in 2015, resulting from financial issues that led to the closure of iron ore mining. Liberia is gradually returning to normalcy, with a projected GDP growth rate of 3% in 2015, higher than in 2014 though still well below pre-Ebola estimates of 6.8%. Guineas economy continues to stagnate, with a projected growth of -0.2% for 2015 compared to pre-Ebola rate of 4.3%.

As a result, the WBG says additional international financing is urgently needed to help the three countries recover fully and reclaim the positive development and growth paths that prevailed before the Ebola epidemic struck West Africa. The pace of recovery in these countries will also depend on how effectively their recovery plans can be carried out.

"The full recovery of Ebola-affected countries is only possible when the outbreak has ended and safeguards have been put in place to prevent re-introduction of the disease,saidUN Secretary-General Ban Ki-moon, who attended the World Bank Group Ebola summit. Our energy must now focus on effective action to eliminate Ebola, the revival and strengthening of health systems, and ensuring the resilience of communities in the face of future threats: these are a precondition for sustainable and durable recovery."