On South Africa: Shocked But Not Surprised 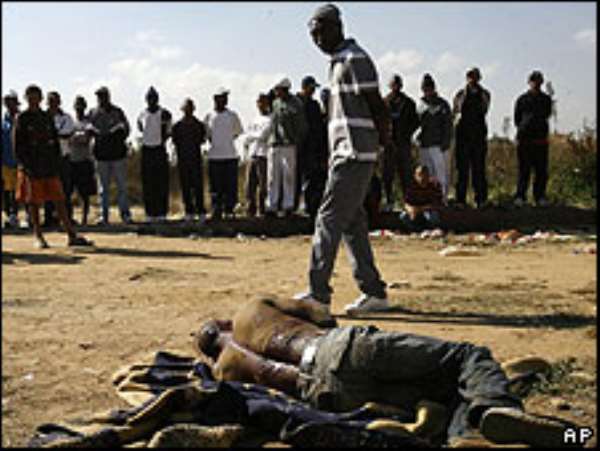 While a student at City College of the City University of New York (CCNY of CUNY) in the mid-1980s, I was named an Honorary Member of the African National Congress (ANC) chapter at City College. I am very proud of this gesture, because the ANC was the only organization on the CCNY campus that non-South African nationals could not join. And this was simply becase the ANC, unlike the other campus organizations and associations, was a bona fide political party whose membership enrollment required South African citizenship. I was afforded Honorary ANC Membership because I regularly wrote about the savage brutalities of the extant white-racist Apartheid regime and the untold mayhem and humiliation it wreaked on that country's ethnic African-majority populace. I also actively participated in protest demonstrations against the Apartheid regime.

But even more importantly, nearly each and every one of my columns on South Africa, which regularly appeared in both The Campus, City College's main student newspaper, and the globally renowned African-American weekly The New York Amsterdam News, demanded an immediate end to Apartheid and the institutionalization of African-majority rule via the ballot box. In short, what I am clearly implying here is that by and large and overwhelmingly, well-educated South Africans appreciate the efforts of their fellow African brothers and sisters outside that ball-point region and nation of Africa towards the struggle to make their country the enviable Black-majority democracy that it is today.

Of course, I also fully recognize the fact that the problem that we are dealing with here is not one that is routinely orchestrated and executed by many a well-educated and gainfully employed Black South African. Rather, it is one that is largely planned and perpetrated by the ordinary barely literate and, at best, marginally educated Black South African youth. In sum, the prime and potential culprits are largely composed of urban youths living a hard-scrabble existence amidst the great wealth of a mineral-rich country and a thoroughgoing corrupt central government who, apparently, have come to envisage their relatively more economically successful non-South African immigrant Black-African nationals from other continental African countries in the mold of their former white-racist overlords of the Apartheid era.

The foregoing observation is, of course, not the least bit intended to meliorate the inexcusably depraved nature of their wanton acts of criminality. For it goes without saying that regardless of whoever commits it, murder is still the most execrable crime against humanity. It is the ultimate crime against humanity; and this is why one direly thirsts for President Jacob Zuma to not only call for an immediate halt to such deadly acts of hostility, as well as dastardly acts of criminality, being allegedly and wantonly perpetrated against Africans of non-South African nationality but, even more significantly, call for the immediate arrest and prosecution of the suspects involved to the fullest extent of the law.

As of this writing, for instance, four Ghanaians resident in South Africa - a man, two women and a baby - were reported to have been brutally murdered in a salon in the city of Heibron, in the Free State province of South Africa (See "Update: Four Ghanaians Found Dead in South Africa" Citifmonline.com / Ghanaweb.com 4/19/15). These are crimes that no conscientious and civilized human is apt to forget anytime soon. We must also highlight the fact that the victims are not all Ghanaians. To be certain, most of them may not be Ghanaian at all. However, it is all-too-natural for the Ghanaian media to focus its attention on victims of Ghanaian extraction or nationality.

The Heibron murders do appear to be atypical of the stereotypical victims, who have invariably been accused of taking up lucrative jobs that ought to be going to Black South Africans. It well appears that the hair salon in which they had been brutally murdered was owned and operated by at least one of the alleged victims. The salon is reported to have been broken into, in order for the murder suspects to gain access to their victims. If this report has credibility, then it also well appears that the bulk of these widely publicized acts of murder verge more on raw and sheer xenophobia than anything else.

Indeed, even as a Zambian-born sales associate and friend said to me recently, "These days in South Africa, non-South African Blacks like us have become the New Kaffirs," prime and acceptable targets of wanton abuse and untold depravity. Mr. Josei Kafunda also had the following to say about the apparently open-season of brutalities unleashed against non-South African Blacks: "It is rather shameful and ironic that nationals of a Frontline State like Zambia, who bore the brunt of white-racist air raids and bombardments in the Apartheid era, should be subjected to such deadly acts of depravity. It makes the former white-racist government seem almost innocent of their wanton crimes of yesteryear."

Mr. Kafunda also informed me that the Zambian government has had to speedily evacuate most its nationals from South Africa. He was, however, not particularly bitter about this morally embarrassing state of affairs. "You see, we in Zambia have been independent for a relatively long time and have had ample opportunity to attend college and train as professionals. Our brothers and sisters in South Africa are just beginning to learn the ropes and catch up with the rest of us."

In Ghana, the John Dramani Mahama-led government of the National Democratic Congress (NDC) appears to be in no hurry to evacuate its relentlessly besieged citizens. For instance, prior to reports of the latest killings, another Ghanaian national, Mr. Emmanuel Quarcoo, was reported to have been set alight while alive by some urban youths in the city of Durban. To their credit, though, a remarkable number of Black South Africans are not taking this criminal attempt to tarnish the image and reputation of their country lightly. As of this writing, nearly 10,000 (ten-thousand) of them are reported to have massed up and poised for a protest march against these largely unprovoked killings.

And right at my desk in New York, I am heavy-hearted and beside myself with implacable sorrow and shame, even as I compose the last sentence of this column.