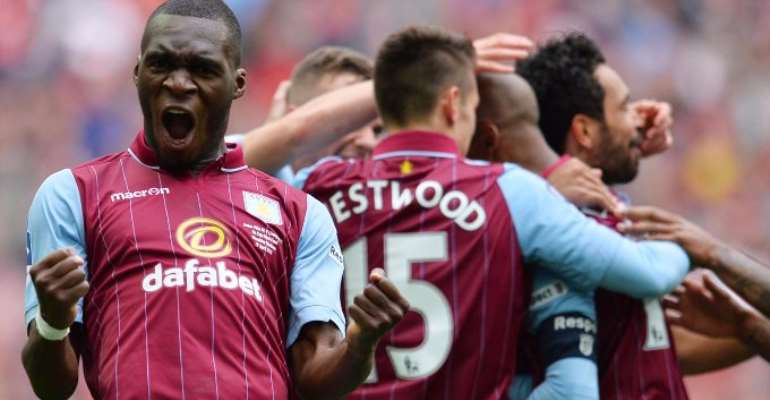 Aston Villa made it through to the FA Cup final for only the second time in 48 years after coming from behind to beat Liverpool 2-1 at Wembley.

Philippe Coutinho opened the scoring but Christian Benteke bagged his ninth goal in seven games to level things in the first half before Fabian Delph struck a second-half winner.

The seven-time winners had only reached the final once, in 2000, since their last triumph in 1957 but now face Arsenal for the chance to win a first piece of silverware in 19 years.

It is no less than they deserve after an impressive display in which they responded admirably to going behind before dominating the second half thanks to standout performances from Jack Grealish and Delph in midfield.

The result means there will be no fairytale finish to Steven Gerrard's Liverpool career as the final falls on the skipper's 35th birthday.

His side will feel aggrieved that Mario Balotelli had a late goal ruled out for an incorrect offside decision but by the time he took his shot the Villa defenders had stopped playing.

Villa were dealt a blow shortly before the half-hour mark when defender Nathan Baker was forced off with a knee injury and they found themselves behind three minutes later.

Jores Okore and Delph failed to clear their lines, allowing Sterling to slip the ball into the path of Coutinho, who tucked the ball past Given with the help of a hefty deflection off Okore.

Villa's response was emphatic as they hit back after just six minutes. Delph gave the ball to Grealish and bust a gut to get into the box to receive it again before cutting back and setting the ball for Benteke to side-foot home.

They took the lead ten minutes after the restart when Delph started and finished a pacey attack. He sent Benteke on his way before getting into the box to receive a neat pass from Grealish, cutting in onto his right foot and slotting the ball past Simon Mignolet. Villa continued on the front foot and might have wrapped things up when they had three on two but Leandro Bacuna chose the wrong pass, allowing Alberto Moreno to make a last-ditch challenge.

Liverpool summoned a couple of late chances as Gerrard saw a header cleared off the line and Balotelli saw his effort ruled out by the flag, but Villa held out for a famous win that was greeted by jubilant scenes among fans and players alike.