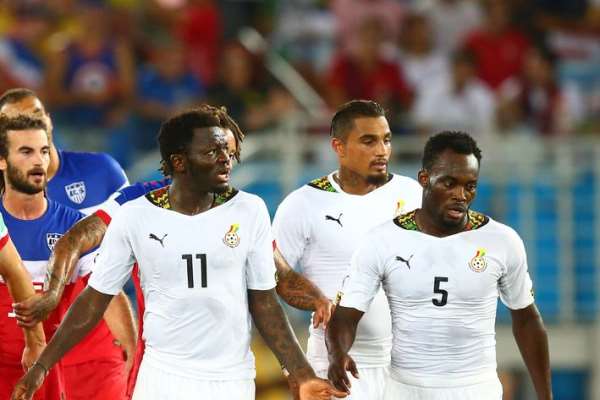 Muntari and Essien have more in common than their club (AC Milan) and country (Ghana): they also might not be moving to RBNY this summer.

It has been a busy time for  Sulley Muntari  since  we last checked in  on the want-away AC Milan midfielder. Scarcely a couple of weeks ago, Muntari had reportedly bought  a $900,000 car , absented himself from  any further competitive games for his club , and was attracting attention from West Ham United, an unspecified club in Dubai,  LA Galaxy , and the  New York Red Bulls .

And this was a few weeks after it was reported he was  a target for soon-to-be MLS team LA FC .

Relieved of the burden of actually having to play soccer for the foreseeable future, however, Muntari has spent the last week or so finding more ways to stay in the news.

First, it was reported he wasn't just not going to play for Milan for the rest of the season, he might not even be in Milan at all:  a tweet suggested he'd popped home to Ghana . Then a teammate, 'keeper Diego Lopez, identified him as  one of the friendliest figures in the locker room  (along with fellow Ghanaian Michael Essien). And that story subsequently hit the press in Ghana with  a dramatically different take : Lopez allegedly saying Muntari and Essien lacked the necessary technical qualities expected by  AC Milan's  fans.

Those stories scarcely had time to settle because Muntari and his wife, Menaye Donkor, have revealed they are  expecting their first child .

And in between all this news, the idea that the Ghanaian's next stop might be MLS was  restated , this time by  TuttoSport  (though it is not as easy an article to find as the outlets that  re-reported the story  might suggest; if you have a copy of that TuttoSport piece, do send it OaM's way).

For RBNY fans, the interesting detail in the Muntari-to-MLS rumor's second outing since the start of April is that the notion the Red Bulls are in the hunt for the midfielder's services survived the redrafting. LA Galaxy is not so lucky: the rumor mill has now decided  Orlando City  SC is the second MLS team interested in bringing the Ghanaian Stateside.

But RBNY is still linked to Muntari.
Or rather, RBNY was linked to him until a circular counter-rumor emerged on April 18:  MilanLive.it reported  that GhanaWeb.com has discovered Muntari is not interested in a move to the US; GhanaWeb.com meanwhile simultaneously claims this news to be  an exclusive and attributes it to unspecified “reports in Italy” .

So not quite a denial of any RBNY interest in Muntari, but certainly a suggestion that the interest is not mutual. Or, as phrased by GhanaWeb.com:

Though no club in Europe has shown an interest in the dynamic midfielder, the former Black Stars player is not thinking of joining any club in the MLS.

Fair enough. Maybe Sulley stays in Europe; maybe he doesn't: one assumes he'll take an offer to play somewhere in the near future (though he is under contract with Milan until 2016), and if the European clubs still aren't interested, then he can only choose from the options presented to him. And one of those options is still alleged to be the Red Bulls.

It's still a far-fetched rumor: Muntari is a man with a taste for $900,000 cars and a growing family to support; RBNY is off to a flying start ( five games unbeaten ) to its new-look, “team-is-the-star” era. It's not clear the Red Bulls have the will to chase high-priced stars in the way they once did.

But the new reality at Red Bull Arena is no deterrent to the rumor mill. While RBNY may be losing its grip on the Muntari rumor, there is more than one Ghanaian international midfielder of significant reputation who wants out of AC Milan.

Michael Essien has also fallen out of favor in Milan, and his contract will expire this summer – so he needs a new contract more urgently than his compatriot and clubmate.

Essien  reportedly turned down an offer  from  FC Dallas  in January, but he has made just  seven league starts  for Milan this season: it's time to move on. The same mid-April rumor that proposed Muntari was still on RBNY's transfer radar suggested Essien was  also a target for the Red Bulls . And Orlando City SC. And unspecified clubs in India.

From RBNY's perspective, this seems even more fanciful than the Muntari rumor. Essien is  a couple of years older  than  his teammate , and has been perceived to be on an injury-accelerated decline for several seasons.

He has played for three clubs in the last three years (Chelsea, Real Madrid and Milan), and has made fewer total league starts for them ( 31 ) in that period than Muntari has made in Serie A over just the past couple of seasons ( 32 ). It's also not apparent why RBNY, committed to fashioning a younger squad, would invest in a player who will turn 33 in December and plays a central midfield role already well stocked (albeit by players of lesser reputation and achievement than Essien).

If the idea of Muntari moving to RBNY seemed improbable, the notion of Essien arriving in Harrison borders on the preposterous. And the suggestion they might both land at Red Bull Arena runs counter to almost everything we've been told about the club's new strategy (younger players, reduced focus on star power, more attention on fashioning a playing identity for long term and a team that is more than the sum of its parts).