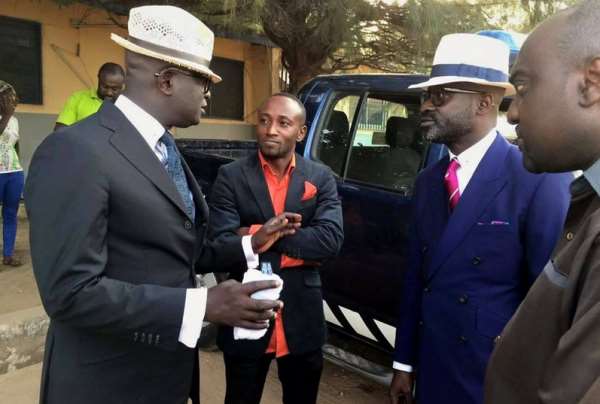 An Accra Fast Track high Court has granted an application filed by lawyers for showbiz icon and broadcaster, Kwasi Kyei Darkwah aka KKD, compelling Nyaho Medical Centre to produce the medical report of Ms. ewuraffe Orleans Thompson - the 19-year-old victim at the centre of the alleged rape scandal.

The court, presided over by Justice Bright Mensah, also ordered the police to produce the crime scene report of the investigations it had carried out at the African Regent hotel, the Airport West residential Area in Accra.

The ruling follows an ex-parte motion filed by Anthony Forson Jnr., counsel for KKD, arguing that the provision of the two documents was crucial to the case currently before the court.

A seven-member jury is expected to be empanelled to preside over the alleged rape trial of KKD by April 22, 2015.

KKD, who is also the Chief executive of the Finest Productions, is facing a charge of raping the victim in the bathroom of the African Regent hotel.

Although the complainant in the case had in a January 15, 2015 letter to the prosecution declared her desire to drop the case against the showbiz icon, state prosecutors would not budge.

The prosecution had said it was sure it had enough evidence to prosecute the case.

According to the Bill of Indictment prepared by the state, the alleged rape incident occurred at the hotel in Accra on December 27, 2014, when the victim had accompanied her cousin, Abena Konadu Owusu- Akyaw, to a fashion show dubbed, 'Rip The Runway Fashion Show.'

Abena Konadu also accused Kofi Okyere Darko (KOD), a cousin of KKD, of trying to kiss her at the hotel.

Ms Owusu-Akyaw told state prosecutors that she on three occasions escaped some kissing attempts from KOD.

Attempts
The Bill of Indictment dated January 28, 2015, signed by Ms Cynthia Lamptey, the Acting Director of Public Prosecution, said 'she and KOD walked into the living room and conversed (and) after a while, KOD attempted to kiss her but she rebuffed the attempt.'

This, the document noted, was after KKD had asked them (Abena & ewuraffe) to accompany him to wait for his cousin (KOD), adding that KKD told them he wanted them to be the faces of Ghana Tourism Campaign.

According to Ms Owusu-Akyaw, KOD, whose name had cropped up as having increased the volume of music playing in the background to douse the muffled sound of Orleans Thompson during the alleged rape, 'tried kissing her a few more times'.

The Bill of Indictment prepared to convict KKD for trial at the high court further stated, 'KOD attempted two more times to kiss her but she did not allow him and begged him not to try anything.'

Noise
The prosecution said at a point in time Abena, who was in the living room with KOD, heard some noise from the washroom and decided to intervene but KOD asked her to sit down.

While the muffled noise got louder over the loud music, KOD asked her if she thought they were having sex and 'she said no because she knew the victim to be a virgin and not a loose girl'.

Don’t give me reason to close down schools again – Akufo-Add...
34 minutes ago