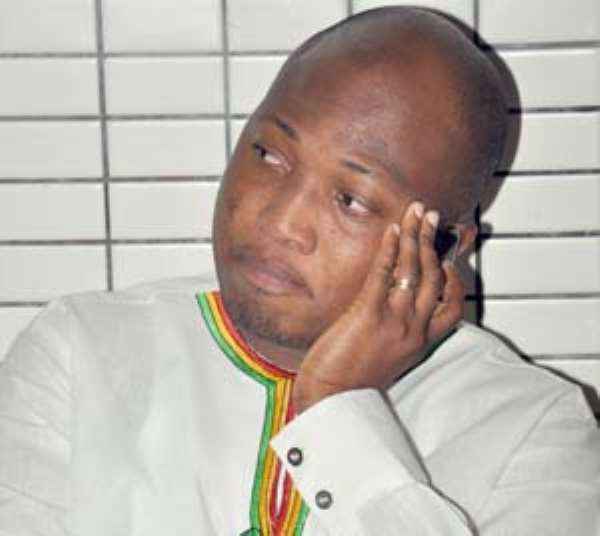 Samuel Okudzeto Ablakwa
Two Deputy Ministers and three other senior government officials were yesterday humiliated by students from five colleges of education in the Ashanti Region who told them in the face to go away with their propaganda.

It all began when the teacher trainees, numbering about 350, drawn from seven colleges of education in the Ashanti Region, in unison, boycotted a meeting under a propaganda-tainted programme called 'Campus Connect', initiated by the Ministry of Education and spearheaded by Okudzeto Ablakwa.

Angered by the bad government policy for trainee teachers, particularly the withdrawal of their allowances, the students waited for Okudzeto to mount the stage and was about to deliver his speech to them when they unanimously started hooting at him and his colleagues, to the amazement of school officials.

A section of the angry students chanted 'Shame! Shame!!' while others shouted 'Go away! Go away!!' as they marched from the event venue at the Wesley College of Education (WESCO), minutes after the MC introduced Okudzeto to the podium.

The minister was taken aback by the sudden weird action of the students, as he looked stunned and pale, whilst the students marched from the event venue, with other dignitaries watching in awe and shock, with disappointment written on their faces.

The students reportedly took that action because they claimed Okudzeto and the NDC government were insensitive to their plight, resulting in the scrapping of their allowances and non-payment of their feeding grant, which had made life unbearable for them.

Reports making the rounds indicated that Kobby Acheampong, Kpessah Whyte, important personalities from the Presidency and representatives from the Students Loan Trust, Scholarship Secretariat, Youth Employment and other key bodies, were also there.

Each of the colleges of education in the region presented 50 students, who the minister was to address and also find out from them what their grievances on campus were; but that was not to be, as the programme ended midstream.

The programme started on a flashy note, with prayers being said, followed by the introduction of the chairman of the function which was met with applause, before the real drama unfolded.

Mr Okudzeto was introduced and he was about to deliver his keynote address when suddenly, the angry students revolted, insisting that they would not sit for the minister to address them because they did not trust him.

Within minutes after the minister ascended the podium, more than two-thirds of the students, numbering about 250 and mostly boys, left the venue, with some of the students openly casting insinuations at the officials.

Water Spraying
A few students, mostly girls that did not leave the venue, were sprayed with sachet water by their angry colleagues, right in the presence of Okudzeto and other dignitaries, including their principals, who looked on helplessly.

Within minutes, the venue was covered with water, as all the students left, amid the chanting of war songs and insults directed at the ministers.

School officials present, who felt bad about the situation, tried to convince the students to resume their seats in order to save the minister from further embarrassment, but to no avail.

When it became apparent that the students were not ready to soften their stance, Okudzeto and his colleagues, quietly entered their cars, as the students continued to chant war songs.

Reports suggested that some of the agitated students even went to the extent of pelting the ministers' vehicles with sachet water amid insults as their convoy left the place at top speed.

Students' President
Speaking to DAILY GUIDE, Kofi Osei Daniel, president of the Teacher Trainee Association of Ghana (TTAG), said even though he was not present at the function, he would solidarise with his colleagues.

He recounted how the Ministry of Education had continually refused to attend to the countless petitions that TTAG had sent to them regarding key issues affecting them on campus.

Daniel said his office had informed the ministry about the financial difficulties they were facing on campus, following the withdrawal of the students' allowance.

He disclosed that in their petition to the ministry, the TTAG said the GH¢800 loan that students could access within a semester was woefully inadequate, considering that they were paying school fees ranging from GH¢1,200 to GH¢1,800 per semester.

Daniel added that students were facing several challenges on campus, in addition to not knowing their fate after leaving school. But with all these challenges, the Ministry of Education, in particular, Okudzeto, seemed not ready to listen to their incessant cries.

He alleged that Okudzeto, at the Education Village in UPS, Accra, on February 12 this year, even refused to grant the leadership of the TTAG audience.

According to Daniel Kofi, Hon Okudzeto tried to outwit the leadership of the TTAG by organising a meeting with some students of the seven colleges of education in the region in Kumasi on Wednesday but it turned sour.

Demo At Legon
Meanwhile, dozens of students of the University of Ghana yesterday marched on campus to protest over what they described as government interference in Students Representative Council elections.

This followed the arrest by the BNI of Stephen Forson, a software engineer who developed the system used in running last week's SRC election.

Stephen Forson was picked up by the BNI on Wednesday dawn.

Davis Ohene Fobi polled over 70% of the total votes cast to beat his closest contender, a government-backed candidate, Mikdad Mohammed, but the result is being challenged.

The students accused government of using the BNI to intimidate them.