Who takes over from Afari Gyan? Party chairmen's dream dialogue with Mahama unconstitutional-Lawyer 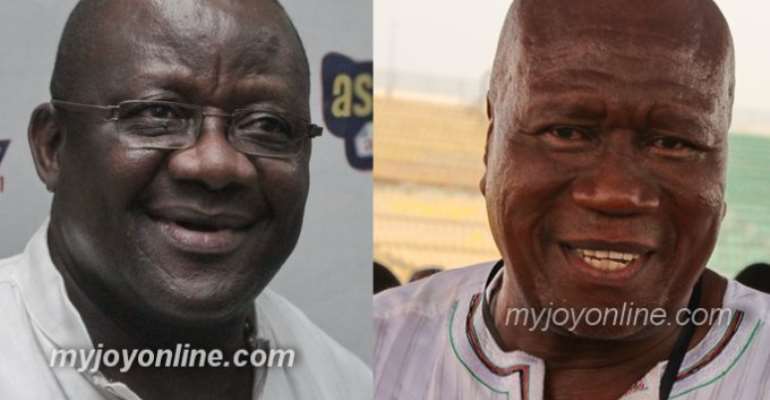 With few months left for the current chair of the Electoral Commission to take a bow, there appears to be a simmering controversy over processes to get a replacement.

Chairmen of four political parties with representation in Parliament are itching to have a say in who replaces Dr Kwadwo Afari Gyan but even that has been shot down by lawyer Kwame Akuffo.

At the end of the Institute of Economic Affairs' organised caucus meeting with party chairmen, it was evident that the party chairmen will not be passive observers to the processes leading to the appointment of a new chairman.

Kofi Portuphy of the governing National Democratic Congress (NDC), Paul Afoko of the New Patriotic Party (NPP), Abu Ramadan of the People's National Convention (PNC) and Samia Nkrumah of the Convention People's Party (CPP) are all singing a chorus of consensus, hoping, not only to draw the president's attention  but for him to open his doors for a discussion on who best fits to take the place of Dr Kwadwo Afari Gyan.

Afoko said with the challenges of the 2012 elections still fresh in the minds of many it is imperative that there must be a broad consensus and consultation before a new chairman is appointed.

But if it was left with lawyer Kwame Akufo alone, the hopes of the party chairmen will remain exactly that- hopes.

In fact he has questioned the aspirations of the party chairmen to dialogue with the president and has described any such dialogue as "unconstitutional."

Quoting Article 70 (2) of the 1992 Constitution the eloquent lawyer Kwame Akuffo said the constitution speaks only of the president acting on the advice of the Council of State as precondition for the appointment of the EC Chair.

A dialogue with party chairmen is alien to the appointment process, he signaled.

He said the Council of State is best suited, insisting such advice must be transparent and opened to all.

But a Senior Fellow at the IEA and a coordinator of the party chairmen caucus Dr Ransford Gyampo vehemently disagrees with the sentiments of the lawyer.

He argued that the real role of the Council of State in the scheme of things is minimal, adding, the council's advice "is not binding on the president."

He said although the party chairmen have confidence in the president's ability to appoint a chairman, there is always the possibility of distrust in the person who eventually becomes the party chair.

He noted that sometimes there is election chaos not based on reality but a perception that the Electoral Commission is biased, a reason all parties must be part of the process in appointing the EC Chair.

Dr Gyampo argued further that there is nowhere in the country's constitution has political parties and their representatives been stopped from dialoguing with the president on issues of mutual interest.

In the past, he said, the late president John Mills met with political parties to confer with them on pertinent issues out of which a decision has been made.

Such practices are only to build consensus amongst all stakeholders, he indicated.

An official with the Centre for Democratic Development Dr Franklin Oduro told Joy News' Dzifa Bampoh that while the president is trusted to appoint a fair-minded EC chair, it will not hurt if he consulted the political parties.

He called for a person with integrity and impeccable record of achievement in the public service to be appointed as EC Chair.