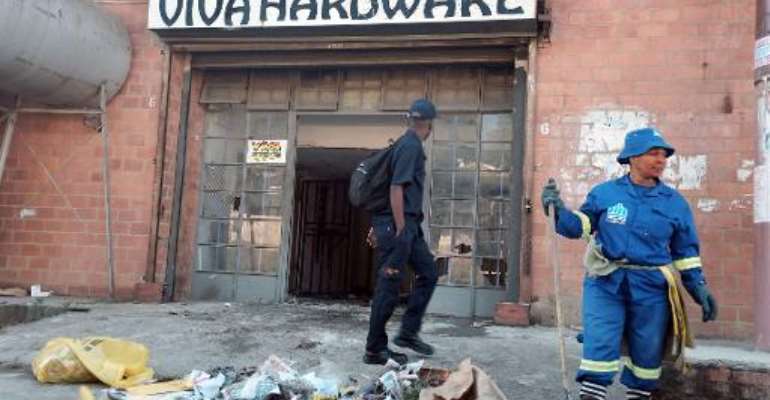 A worker from the municipality cleans up dirt left from a xenophobic attack on Somali businesses in Umlazi township south of Durban, South Africa, on April 10, 2015. By Rajesh Jantilal (AFP/File)

Johannesburg (AFP) - One of the two Ethiopian brothers who were burned by a rampaging mob in anti-foreigner violence at a South African township has died, a community leader said Sunday.

The two men were in their shop in Umlazi, south of Durban, when it was petrol-bombed on Friday night.

"The hospital has informed us that our brother (meaning a fellow Ethiopian) died. They said he died shortly after arriving in hospital," said Ephraim Meskele, leader of the Ethiopian community in Durban.

Meskele said the other brother had severe burns and was "fighting for his life" in hospital.

"This is like a war zone. It's like we are in Syria. I have never seen such cruelty," Meskele told AFP.

Over a thousand mostly African foreign nationals have fled their homes in black townships around the eastern port city of Durban since xenophobic attacks and looting erupted two weeks ago.

They are currently housed in makeshift camps, as police and politicians attempt to restore order.

According to Meskele, the Ethiopian community was the worst affected.

Police said the reason for the outbreak in xenophobic attacks was unclear, with contradictory reports about the death toll.

According to police spokesman Thulani Zwane, four people had died in the violence, but some media reports put the figure at six.

A total of 17 people have been arrested in two weeks.

"We have heard from our members that some police officers are actually encourage the looting. That is shameful," said Meskele.

Violence against African immigrants in South Africa is common, with impoverished locals accusing foreigners of taking their jobs and business.

The government has condemned the violence, with President Jacob Zuma sending a team of officials to assess the situation.

"We reiterate that there can be no justification for attacking foreign nationals," Zuma said Sunday.

The latest round of xenophobic violence came just months after similar attacks around Soweto, south of Johannesburg.