By Ben Simon with Joel Olatunde Agoi in Port Harcourt 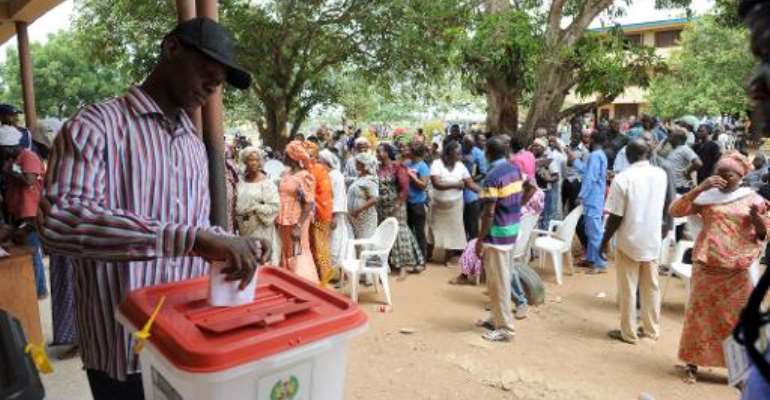 Lagos (AFP) - Nigeria's All Progressives Congress on Sunday made key gains in regional elections and kept power in the economic capital Lagos, strengthening its position nationwide after a historic win in the presidential vote last month.

The Peoples Democratic Party (PDP) had controlled the presidency and a majority of Nigeria's 36 state governments since the end of military rule in 1999.

But the APC will take charge nationally when president-elect Muhammadu Buhari is sworn in on May 29, in the first-ever democratic change of power in Africa's most populous country and its top economy.

Official results from the Independent National Electoral Commission (INEC) said the APC had claimed the governor's seat in Kaduna and Katsina, two northern states held by the PDP since democracy was restored.

Experts say Nigeria's gripping 2015 election cycle has highlighted democracy's growing hold in a nation plagued by military coups and tainted elections since independence from Britain in 1960.

Rivers state, an oil-producing hub in the south, was the worst affected area with 16 separate outbreaks of unrest, an INEC statement said.

Voting was extended into Sunday in nine wards in Rivers after irregularities affected several polling stations.

The results in other parts of the state were thrown out after ballot papers were openly stolen, INEC's top official in the state, Gesila Khan said.

The APC alleged widespread rigging after Jonathan won Rivers with more than 95 percent in the national polls two weeks ago, insisting it would not allow a repeat in the state vote.

Amaechi's spokeswoman Ibim Semenitari on Sunday accused the PDP of orchestrating a massive ballot-stuffing campaign and called on the INEC to "ensure that the people's voices are not silenced".

INEC broadly praised the conduct of the vote nationwide, saying electronic voter identification devices -- used for the first time in the presidential vote last month -- generally worked well despite problems in some areas.

Fear of unrest was high in Lagos following a tough campaign between Akinwunmi Ambode of the APC and the PDP's Jimi Agbaje.

But Agbaje conceded after losing by less than 200,000 votes in the megacity and surrounding state of Lagos, with no significant incidents of violence reported surrounding the polls.

The APC's wins in Kaduna and Katsina were largely expected.

The governor-elect in religiously divided Kaduna, Nasir el-Rufai, is a prominent APC leader and former cabinet member with a wide following in the state, while Buhari is a native of Katsina and the party was boosted by his presidential win.

Results from Adawama, a northeastern state hit hard by Boko Haram Islamist militants, had not yet been finalised, but PDP candidate Nuhu Ribadu issued a concession statement earlier on Sunday suggesting the APC had won there as well.

The APC controlled 14 states heading into Saturday's vote, against 21 for the PDP.

But partial and unofficial results indicated that Buhari's party could claim a majority of states nationwide, with victories possible over pro-Jonathan governors in at least three other states.

Taraba in the east is in the spotlight because it could return a female governor for the first time in Nigeria's history in the shape of Aisha Jummai Al-Hassan.

A total of 29 governorship and deputy governorship positions were up for grabs as well as seats in all of the states' legislatures.

Governors are influential figures in Nigeria, with near-total control of their states and collective power at a national level to bolster or check the presidency.

Jonathan made history by conceding the presidential election before the final results were announced, winning plaudits for his statesmanship and for defusing the threat of violence.

Information Minister Patricia Akwashiki on Saturday urged candidates in the local polls to follow his example, with previous elections in Nigeria hit by violence.

"If our president was able to walk away from an election and accept defeat, everybody, the winner and the loser, should be able to accept that the people's will is what will carry the day," local media quoted her as saying.