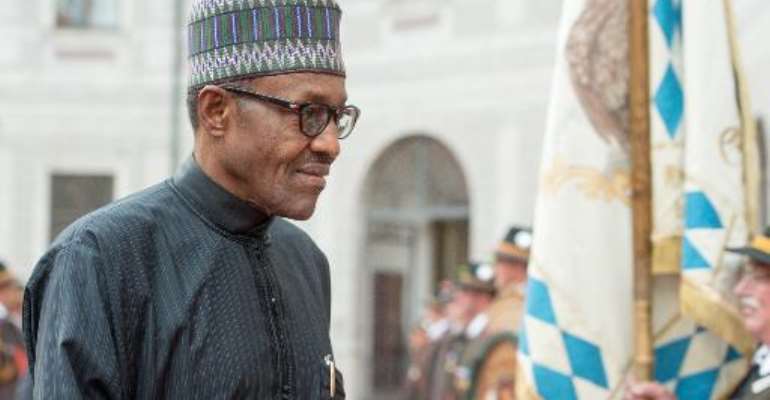 Nigeria's new President Muhammadu Buhari, pictured on the sidelines of a G7-summit in Munich, on June 7, 2015, holds talks with regional leaders on Boko Haram, with hopes a new fighting force will help crush the Islamists. By Armin Weigel (DPA/AFP/File)

Heads of state and government from Niger, Chad, Cameroon and Benin jet in to Nigeria's capital, Abuja, after two days of preparatory discussions involving military top brass and defence ministers.

The meetings come on the back of Buhari's appeal to world leaders at the G7 summit in Germany last weekend for more help in combating extremism and visits to Chad and Niger.

Buhari, 72, has made ending the militants' reign of terror his top priority and has already moved the military's command centre from Abuja to Maiduguri, in the rebels' northeastern stronghold.

The flurry of activity since his inauguration on May 29 stands in stark contrast to years of apparent inaction in tackling the group by his predecessor, Goodluck Jonathan.

Political analyst Imad Mesdoua said Buhari, a former military ruler and retired army general, was aware he had to address the issue swiftly during his honeymoon period with the electorate.

"He has zero time. I really think he has to hit the ground running. He has to get everything in place as fast as possible," Mesdoua, from the Africa Matters consultancy, told AFP from London.

The five-nation Multi-National Joint Task Force (MNJTF) was first agreed upon in May last year, a month after Boko Haram shocked the world by kidnapping more than 200 schoolgirls in northeast Nigeria.

It was supposed to be operational in November 2014 but was dogged by wrangling between Anglophone Nigeria and its Francophone neighbours, whom it has long viewed with suspicion.

Reviving the force was brought to the fore in January, as Boko Haram hit northeast Nigeria almost daily and began to eye territorial gains in border regions of Niger, Chad and Cameroon.

An 8,700-member unit backed by the African Union was finally agreed, with headquarters in Chad's capital, N'Djamena, under Nigerian Major General Tukur Buratai.

The headquarters will cost some $30 million (27 million euros) to run over the next year, the head of the Lake Chad Basin Commission security group, Sanusi Imran Abdullahi, said on Wednesday.

Buratai, who has already started work, according to Abuja, told the BBC on Tuesday the violence had been "dragging on for too long and we want to get a final solution to it".

The new MNJTF will replace an existing coalition of Nigeria, Niger, Chad and Cameroon, that has claimed a series of successes against Boko Haram since February.

Nigeria's chief of defence staff Alex Badeh said on Monday this week's meetings indicated the countries' "common resolve to put an end to a menace that has become a regional and... global problem".

"If there is any time for us to rise in one voice, irrespective of our differences, it is now," he added.

Buhari's pro-active stance against Boko Haram has sent encouraging signs to the international community frustrated by dealings with Nigeria under Jonathan, according to security analysts.

"The G7's unprecedented pledge to support the country –- details of which are still to be worked out –- reveals the level of trust key international leaders place in Buhari's leadership," said Malte Liewerscheidt, senior Africa analyst at Verisk Maplecroft.

"Enhanced international support will be critical to sustain the long-term effort needed to defeat the Islamist insurgents."

The regional meeting will be closely watched for indications about the extent to which foreign forces can operate inside Nigerian territory.

Chad and Niger have both complained that Abuja prevented their troops from pursuing militant fighters deeper into Nigeria's northeast, allowing the insurgents to get away and re-group.

Buhari has underlined the need for long-term, regional co-operation, particularly as Boko Haram has allied itself to Islamic State group militants in Syria and Iraq.

Boko Haram has reverted to guerrilla tactics since being forced out of captured towns and villages, with at least 12 attacks since Buhari took over and 109 deaths, according to AFP reporting.