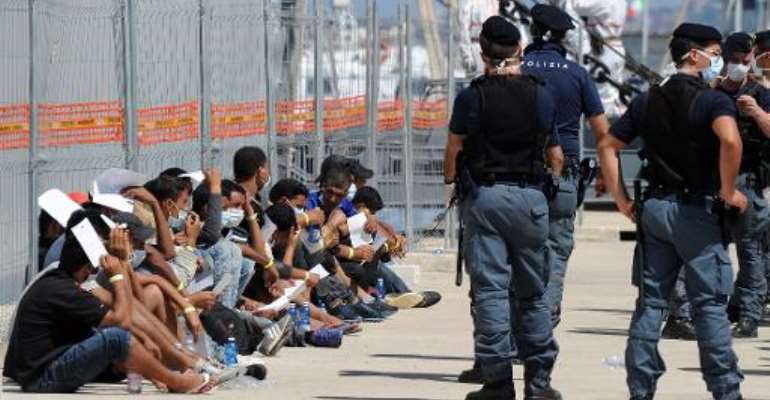 Immigrants wait after disembarking from an Italian military ship on August 11, 2014 in the port of Reggio Calabria, southern Italy, following Mare Nostrum rescue operations at sea. By Giovanni Isolino (AFP/File)

Paris (AFP) - Two international aid groups said Friday they would run a "life-saving" operation in the Mediterranean this summer, as thousands of desperate migrants and refugees try to reach Europe.

"The life-saving operation will run from May to October, when thousands of people are expected to risk their lives attempting to reach safe haven in Europe," Medecins Sans Frontieres (Doctors Without Borders) and Migrant Offshore Aid Station said in a statement.

Last year, in what the organisations said was "the deadliest year on record for people crossing the Mediterranean", 3,400 people died trying to reach Europe.

The UN High Commissioner for Refugees has described the Mediterranean as "the world's deadliest route of all" for migrants.

"This year the death toll is predicted to be even higher, as even less assistance is available to boats in distress," MSF and Migration: MOAS said.

Instead, the EU borders agency Frontex launched patrol operation Triton, whose focus on surveillance was criticised by rights groups.

"Europe has turned its back on people fleeing some of the worst humanitarian crises of our time," MSF's general director Arjan Hehenkamp said.

Many of those trying to reach Europe are Syrians fleeing a four-year conflict that has killed more than 210,000 people and forced half the population to flee their homes.

People trying to reach Europe routinely pay smugglers exorbitant sums for a journey on a rubber dinghy that they might not even survive.

"The decision to close doors and build fences means that men, women and children are forced to risk their lives and take a desperate journey across the sea," Hehenkamp added.

MSF and MOAS teams will be stationed in the central Mediterranean aboard the MY Phoenix, a 40-metre (yard) ship, the statement said.

"No one deserves to die, and we will do everything in our power to ensure that those who feel compelled to undertake this treacherous sea crossing in makeshift vessels do not drown," MOAS director Martin Xuereb said.

The number of migrants entering the EU illegally in 2014 almost tripled to 276,000, according to Frontex, nearly 220,000 of them arriving via the Mediterranean.

The chaotic situation in Libya has sparked a rise in migrant boats setting out for Europe from its unpoliced ports carrying refugees fleeing conflict and poverty in the Middle East and Africa.