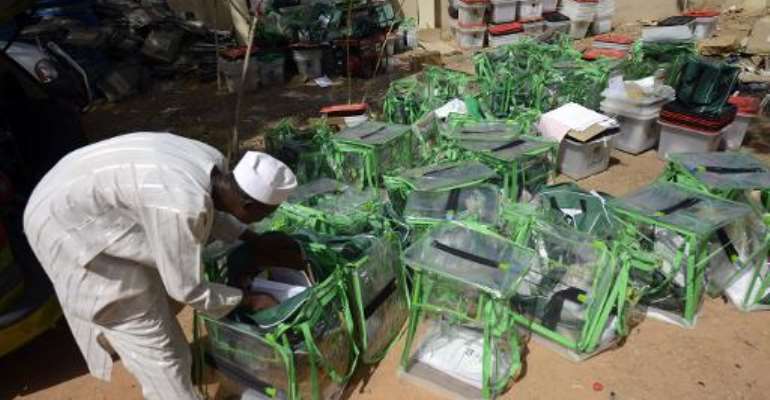 Lagos (AFP) - Nigerians return to the polls on Saturday for gubernatorial and state assembly elections, two weeks after the country's historic first opposition victory in the presidential race.

Polling stations open from 8:00 am (0700 GMT) for the regional vote, which will be watched closely to see whether the opposition translates its national success into gains at the local level.

Only 29 states will have governorship elections because of mid-term polls held since 2011, while voting for the state assembly is in all 36.

Stakes are high, with state governors in Africa's most populous nation in a powerful position controlling the purse strings in areas such as local health, education and infrastructure projects.

"The presidency is very distant from most Nigerians, so the governors are essentially the middle men between the presidency and the people on the ground," said political commentator Chris Ngwodo.

"The governors actually have more direct impact on the people than the presidency," he told AFP.

Buhari won the March 28 presidential election with 54 percent of the vote, securing the first win for the opposition in the country's history after a gripping and largely peaceful contest.

The 72-year-old campaigned on a slogan of "change", breaking 16 years of unbroken PDP rule since civilian government was restored against a backdrop of mounting dissatisfaction with the government.

"I think the APC will win more states. It's quite competitive in a number of places but with the results of the presidential election, one might expect a bandwagon effect in certain states," said Ngwodo.

"The APC will definitely do better than expected because they have been able to win at a national level," added Dawn Dimowo, from the africapractice consultancy.

"Knowing how Nigerian politics works, it tends to align to the centre."

Both analysts pinpointed several areas where the governorship race will be close or could see a shock:

- Lagos: Nigeria's financial hub in the southwest drives the country's economy but turnout in the presidential election was low and the result was close in favour of Buhari.

The megacity of 20 million people and state of the same name has been opposition-controlled since 1999 but candidate Akinwunmi Ambode is facing a strong challenge from the PDP's Jimi Agbaje.

- Rivers: the oil-producing state in the southern Delta region includes the key city of Port Harcourt and has long been a flashpoint for clashes, including this year.

Extra flavour has come this time round because of outgoing governor Rotimi Amaechi's defection from the PDP to the APC, his criticism of Jonathan and rigging claims during the presidential contest.

- Kaduna: the religiously and ethnically divided northern state is PDP controlled but two weeks ago nearly 70 percent of people voted for Buhari, who lives in the state capital.

The APC and its candidate Nasir El-Rufai, a former senior government minister, could topple governor Mukhtar Ramalan Yero if that is replicated at the local level.

- Plateau: the volatile state in Nigeria's "Middle Belt", where the largely Christian south meets the mainly Muslim north, has been held by the PDP since 1999.

But governor Jonah Jang leaves office for the Senate with opponents angry at his eight-year tenure, particularly in terms of the state's finances, raising the possibility of a protest vote.

Nigeria's electoral commission has said new devices to "read" biometric voter identity cards will be used again, despite some malfunctions that hit voting during the presidential elections.

Security will also remain tight, given lingering fears of a repeat of political violence that has blighted previous polls and the threat of Boko Haram attacks.

The government's spokesman on security, Mike Omeri, also called for "a similar level of vigilance and caution" as two weeks ago because of fears of Boko Haram attacks.

The Islamist militants were suspected of attacking a number of polling stations in the restive northeast but there was no widespread targeting of voters as feared.

Boko Haram leader Abubakar Shekau had vowed to disrupt the elections, which the group sees as "un-Islamic".

Chiefs and Queen mothers of Nadowli-Kaleo congratulate Alban...
12 minutes ago

I intend to live my my oath – Bagbin
12 minutes ago