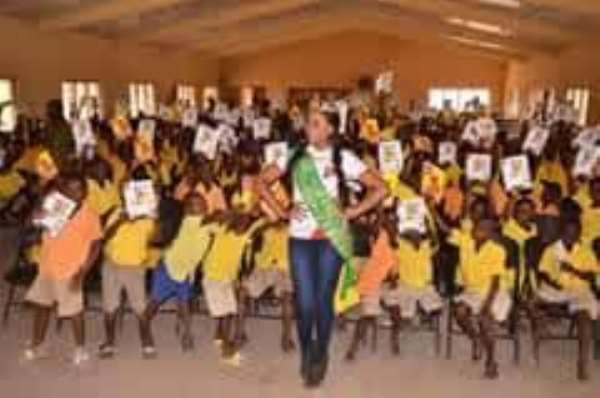 School children in the Northern, Upper East and Upper West Regions; have received a total of 30,000 branded exercise books from Samara Group of Companies, to boost their basic education.

The books were distributed on separate dates, and through the regional representatives – Lamine; Baci, and Ruky, for the Upper East, Upper West, and Northern Region, respectively, of the 2014 Ghana's Most Beautiful (GMB) beauty pageant organized by TV3.

Each region received 10,000 exercise books to be distributed to its poor and needy pupils selected from various traditional areas and districts across the regions.

The schools were selected from the Wa District, Tumu District, Jirapa and Nadowli Districts.

In an interview, the Bole District Director of Education in the Northern Region, Ms. Leocadia Zakpala, said the Northern Region has been the poorest region in terms of education; emphasizing that the initiative taken by Samara Group of Companies to help the school children is very laudable.

She decried that one of the reasons for the poor performance of the children has got to do with the lack of basic learning materials for the pupils to support their basic education, which serves as the main foundation for their entire education in their lifetime.

Ms. Zakpala called on corporate institutions to come on board and help salvage the situation.

The Marketing Manager of Samara Group of Companies, Mr. Sedrick Nartey Ologo, underscored the need for the school children to be assisted with basic education materials to enhance their studies, hence, the move to put up a nationwide books distribution exercise.

He said the distribution forms part of the company's corporate social responsibility to help members of the society in terms of education, health and human security.

Mr. Ologo disclosed that 40,000 free exercise books had already been distributed to school children in the Brong Ahafo, Central, Western and Volta Regions, prior to the distribution exercise carried out in the three Northern Regions.

He mentioned that the remaining three regions – Ashanti, Eastern and Greater Accra Regions will in the coming weeks receive their share of the free exercise books which are being given out to school children nationwide.