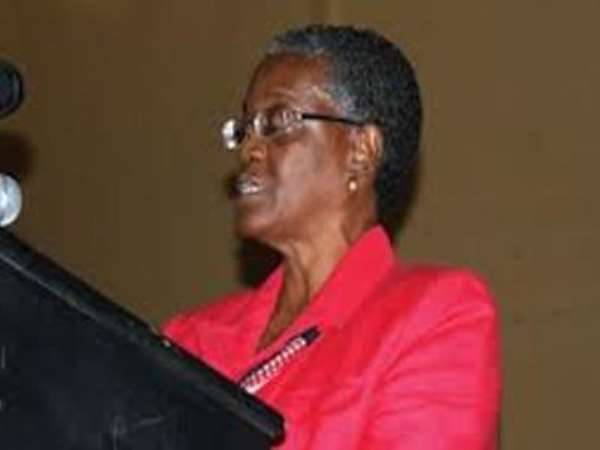 Dr. Evelyn Kandakai
Accra, Apr 9, GNA - Dr. Evelyn Kandakai, a Liberian, has been elected the 18th Chairman of the West African Examination Council (WAEC) at the 63rd Annual Meeting of the Council in Lagos, Nigeria

Dr. Kandakai is the first female to be elected to the position in the 63 year history of the Council. Her election is for three-year tenure in line with the Council's Convention.

She succeeds Emeritus Professor P. A. I. Obanya of Nigeria, who was elected in March 2012.

A statement from the Public Affairs Unit of WAEC, Ghana, said the 63rd Meeting, was held from Monday, 23rd to Wednesday, 25th March 2015.

The Council, which is the governing board of WAEC, holds its yearly meeting in rotation among the five member countries - The Gambia, Ghana, Liberia, Nigeria and Sierra Leone.

The scheduled host for the 63rd Annual Meeting was Liberia but due to the outbreak of the Ebola virus disease in that country, the Council's headquarters undertook all the arrangements for the meeting on behalf of Liberia and shifted the venue to Lagos.

Delegates from the five member countries who attended the three-day meeting were made up of government nominees as well as representatives of the ministries of education, universities, secondary schools and other interest groups.

The meeting also featured the 20th Annual WAEC Endowment Fund Lecture entitled, 'What Are We Writing on the Slate: A Holistic Preparation of the Youth', which was delivered by Augustine Kpehe Ngafuan, Minister of Foreign Affairs, of Liberia.

The statement noted that during the deliberations, Council received reports on the activities of the five country offices in the preceding year, and ratified the decisions taken on its behalf by the various committees.

The Council also considered the Action Plans presented by the country offices and committees for hitch-free operations in the current year, the statement said.

'Council appreciated the Governments of the member countries for their goodwill, cooperation and assistance to WAEC since inception in 1952 and expressed gratitude to the teachers, officials of the ministries of education, the security agencies and all other stakeholders in the member countries who constantly assisted WAEC to achieve success in its operations and activities, ' it said..

It also commended Management of the various WAEC Offices for implementing effective innovations that had brought improvements in the operations of the examining board.

The statement said the Council expressed deep sorrow over the loss of lives and property in the wake of the Ebola epidemic and activities of insurgents in some member countries, and urged the country offices to remain vigilant and proactive to ensure that candidates were not exposed to any form of danger while sitting for WAEC examinations.

The Council also honoured three candidates with the WAEC International Excellence Award in recognition of their outstanding performance in the May/June 2014 WASSCE.

The candidates, all Ghanaians, were selected from a total of 2,018,497 candidates who sat the examination in the five member countries

The Augustus Bandele Oyediran Award for the Best Candidate in West Africa was also presented to Master Mickail Hasan.

Mr. Eli M. Lumei, a citizen of Liberia also received the prestigious award of Distinguished Friend of Council for his outstanding contribution to the success of the work of WAEC.