Is There A Ban On Employment In Both The Ghana Education Service And The Ghana Health Service? 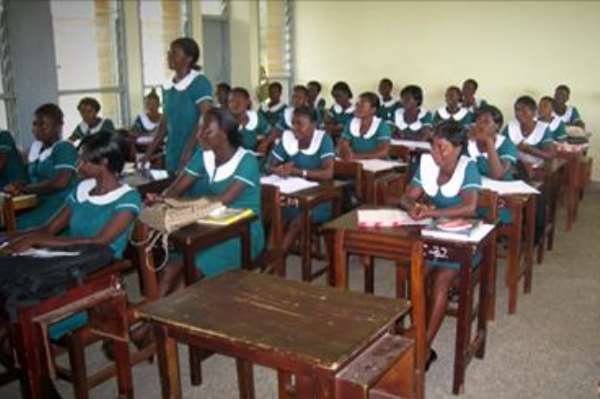 This meant that all forms of recruitment be they replacement of retired and deceased staff, reinstatement of teachers who went for further studies without study leave with pay et al were proscribed with immediate effect sine die.
This policy only allowed the employment/re-engagement of teachers who passed through the thirty-eight Colleges of Education and teachers who pursued further studies with study leave with pay. It also meant professional teachers who graduated from the University of Cape Coast (UCC), University of Education Winneba (UEW) and private Colleges of Education were illegible for engagement by GES. In effect, this policy rendered these teeming professionals unemployed.

The rationale behind this policy, I am told, was to pave way for the Teacher Rationalisation Exercise that the Service intended embarking on to ensure that teachers were not overly concentrated in the urban and peri-urban centres much to the detriment of schools and pupils/students in the rural areas thereby hampering the quality of education in these areas.

Almost two years after the coming into effect of this policy, we are still kept in the dark as to whether the rationalization exercise has concluded so that the teeming professional teachers who are rendered jobless by this policy can avail themselves for engagement or not. The GES has kept mute over this issue. All attempts by me to ascertain the status of this policy and whether the rationalisation exercise had come to an end or otherwise have proven abortive.

In a related vein, there is also a ban on recruitment into the Ghana Health Service (GHS). Health professionals who are trained from any other institution apart from the traditional Nurses/Midwifery Training Schools who are sponsored by the government are rendered jobless, thanks to the prevailing ban on recruitment in the GHS. I am not privy to the rationale behind the ban in this sector.

This ban is buttressed by a statement reportedly made by the immediate past health minister, Dr Kwaku Agyemang Mensah, on his visit to the three regions of the north to inspect Ebola Preparedness Centres. In a statement attributed to him by Citifmonline.com, Dr Agyemang Mensah said he was going to make a strong case to the minister of finance to allow the health ministry recruit certain critical staff for the health sector in northern Ghana. This was necessitated by the high number of health professionals who retire every year compounding the already volatile health situation in these areas. If Dr Agyemang Mensah's statement is anything to go by, it presupposes that there is indeed a ban on recruitment in that sector- GHS.
In all this, the anthem of the Ministry of Finance and government communicators is that there is no ban on recruitment into these two subsectors; the GHS and the GES. Minutes after Mr Seth Terkper had presented the Budget Statement for the 2015 fiscal year; a deputy minister of finance, Ms Helena Mona Quartey, in an interview on Joy FM an Accra-based radio station indicated unequivocally that there is a ban on recruitment into the public sector except in the areas of education and health.
On Friday, the 3rd of April 2015, the Minister of Finance, Mr Seth Terkper was interviewed on Joy FM shortly after news broke that the board of the International Monetary Fund (IMF) had approved Ghana's programme with the IMF for an Extended Credit Facilty (ECF). The question that piqued my interest in the course of the rather terse interview was the one in relation to a freeze on employment and possible retrenchment of public sector workers as part of the conditionalities. Mr Terkper was asked if the ECF programme would not lead to job losses in the public sector exacerbating the already high unemployment situation in the country. The response of Mr Terkper was that there had been a net freeze on employment in the public sector and this ban dates as far back as 2009. He however averred that the freeze on employment does not affect the education and health sectors.
What is the finance ministry and by extension the government running away from? What are they afraid of? Why this continuous deceit of the general public? Is the finance minister saying he is oblivious of the ban in these two subsectors? Why this proclivity to do propaganda with almost everything? If the claims by the finance ministry and government communicators are anything to go by, why are these institutions not recruiting? The situation on the ground is different from what the government and its communicators would want us believe.
It is so nauseating that public officials who are paid by our sweats, toils and sustenance keep throwing dust into our eyes all in the name of political expediency. I will be gobsmacked to learn that the minister in charge of the national purse and the planning of the economy will be so ignorant that he does not know the happenings in these subsectors.

Perhaps it he has also mastered the art of telling lies since he had accused by Mr Mahama Ayariga as being truthful as though truthfulness had been outlawed in the statutes of Ghana. The health and education sectors are the drivers of the human resource base of any economy. The role of these two sectors in the forward march of any positive thinking economy cannot be over-emphasised.

There are thousands of empty classrooms which are in dire need of teachers. There are also thousands of professional teachers who are ever ready to jump into the classrooms to impart knowledge when offered the opportunity but the powers-that-be say NO. The story of the health sector is not different. No wonder we are where we are.

In conclusion, it is time the government told us the truth. The days when information could be hidden from the general public are long over. It is puerile on the part of public officials to try hiding pieces of information that are already in the domain of the public.

God bless our homeland Ghana and make our leaders selfless and wise.