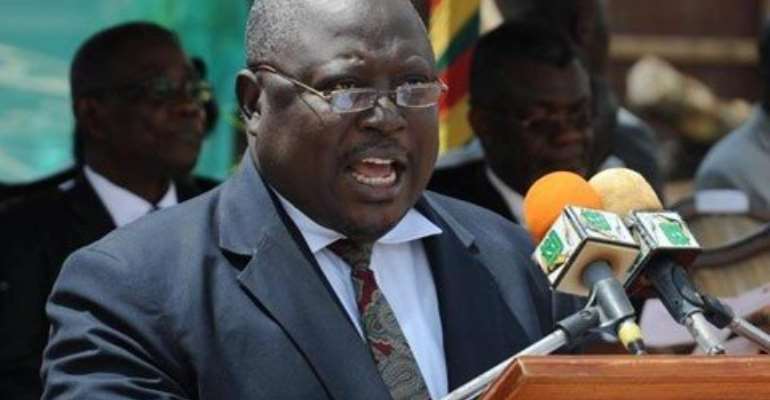 Former Attorney General, Martin Amidu has served notice to the Mahama-led administration y that he will continue to defend himself in the media because the Presidency has been reduced to “a leaking pot of correspondence.”

He accused the government of lacking integrity and honour after a confidential letter of apology he wrote to the late former President John Mills was leaked to the media.

The Al-hajj newspaper last Thursday published Martin Amidu's apology letter over a confrontation between Mr Amidu and the late President.

Mr Amidu has argued subsequently that he was asked by two important states men at the time, to write the letter.

The former AG has expressed disquiet about the publication of the letter describing it as a “dishonour” to the image of the Presidency.

In a statement, Mr. Amidu observed that “any government and its political party which seeks to deceive its citizens by subterfuge and chicanery (as in this case of the libelous publications by the Al-Hajj and other media after the consent judgment) in the name of propaganda is bound to be found out soon by the voting public which will exact a price for the deceit at election time.”

Below is his full statement:
CORRUPTION MANIFESTS ALSO IN LACK  OF INTEGRITY AND HONOUR IN GOVERNANCE- LEAKING LETTER OF APOLOGY FROM A PRESIDENT'S OFFICE: BY MARTIN A. B. K. AMIDU

On Thursday, 2nd April 2015 the Al Hajj newspaper published a letter of apology which I had written and was hand delivered to the then Chairman of the Council of State by my Secretary at the Attorney General's office, Ms. Perpetual Achiana, (not Patricia as I had referred to her on Citifm ), at the behest of two elders of the PNDC and NDC Governments I had all along considered my role models and mentors.

When Citifm called me and confirmed that the letter published by the Al Hajj newspaper had a stamp of the office of the President on it, I had no inhibitions from telling my side of the story, even though I had not personally read the newspaper. Why will I keep quite when the office of the NDC President of Ghana has been reduced to a leaking pot of correspondence between the Presidency and its Ministers or former Ministers?

In spurious defence of the opportunist par excellence, the dismissed former National Security Co-ordinator (Larry Gbevlo-Lartey),  Alhaji Bature, of Al Hajj newspaper could not have the discretion to block the primary source of his leak and thus did dishonour to the image of the Presidency, the NDC Government, and the NDC party whose communicators joined the band wagon on several radio stations to demonstrate how, in the words of the Al Hajj newspaper: “…., but his (Martin Amidu's ) own apology letter, which all along he had sought to conceal, has proven that indeed he gave a skewed version of what led to his sacking from the Mills/Mahama administration.

I have never sought to hide or conceal any signed letter of apology which was hand delivered by my Secretary at the Ministry of Justice to Prof. Kofi Awoonor on the morning of 18th January 2012 when he said he needed it for an appointment he had with the President that morning. I hope the Public Agenda will in the interest of fair journalistic practice confirm to the public what I told Citi FM on 2nd April 2015 that I had sought to have both my warrant of termination and letter of apology published with my side of the story as soon as I had been removed from office.

Why did John Dramani Mahama's Government, the NDC, or Larry Gbevlo-Lartey refuse to inform Ghanaians and the pitiful Alhaji Bature that I commenced an action in the High Court, Automated Court 2 against the Government of Ghana (per the Attorney General) on 30th July 2013 for amongst other reliefs: “(a) damages for breach of contract of employment effective 1st July 2009 and dated 25th August 2009”. In my accompanying Statement of Claim I had stated in outline the facts as they related to the invitation on the night of 17th January 2012 from Captain Tsikata for me to see Prof. Kofi Awoonor, Chairman of the Council of State the next morning; what transpired and concluded as a letter of apology from my discussion with Kofi Awoonor on 18th January 2012; and the latter invitation by Alhaji Mahama Iddrisu on the same 18th January 2012 to his residence with a demand from the President to me on pain of dismissal to withdraw my press statement dated 11th January 2012 on Gargantuan crimes committed by some Ministers of State and other NDC supporters.

The Government was a party to this suit which terminated with the filing of Settlement Terms on 2nd September 2004 by the Government, the adoption of the Settlement Terms as a Consent Judgment by the High Court on 4th September 2014 which awarded “…Plaintiff cost of Six Thousand Ghana Cedis (GHâ‚µ6,000.00)”, and an Entry of Judgment on 11th September 2014. I had earlier filed a Reply to the Defence and applied for admissions and certain admissions were made. I then followed up with an Application for Directions to the Court for the trial. My application was held in abeyance from January 2014 to September 2014 as the High Court encouraged the proposals from the Government to explore an attempt at settlement negotiations with me which I did not oppose because it avoided the inevitable task of my having to subpoena (which I had intimated I was going to do) Captain Kojo Tsikata, Prof. Kofi Awoonor and Alhaji Mahama Iddrisu to give evidence publicly at the trial.

Any Government and its political party which seeks to deceive its citizens by subterfuge and chicanery (as in this case of the libelous publications by the Al-Hajj and other media after the consent judgment) in the name of propaganda is bound to be found out soon by the voting public which will exact a price for the deceit at election time. It brings dishonour to the President, the Government and the party, NDC. It also magnifies perceptions of corruption from the Presidency and the Government as the lack of integrity and honour in governance is an integral part of the manifestation of endemic corruption.

A soft copy of my Statement of Claim filed in the High Court, Automated Division on 30th July 2013 in Suit No. AP. 159/2013 entitled Martin A. B. K. Amidu vs. The Attorney General is attached below for the public to make up its mind about the consistency of my contentions during and after I left office as Attorney General. I will also be sending along a portable document format (pdf) scanned copies of the Statement of Claim, and the Application for Directions for any doubting Thomas' who need direct supporting evidence. I have nothing to conceal or to hide from the public in this matter which has in one way or the other always been in the public domain in the Court system.

The Presidency, the Government, and of late the NDC appears to be relying on a multiplicity of mere axioms as proof of facts without any shred of supporting factual evidence whatsoever to intimidate and distract me from pursuing the refund with interest of the gargantuan judgments debts they created, looted and shared. I shall not be diverted from the original values of the NDC notwithstanding any amount of dishonourable propaganda they may make against me.

It is not too late for this NDC Government and Party to revert to the laudable values of honour and integrity which is at the core of the NDC as a social democratic party before the 2016 Elections. Putting Ghana First before Government or Party is the only social democratic solution and salvation for the Black Star to shine again.

IN THE SUPERIOR COURT OF JUDICATURE
IN THE HIGH COURT OF JUSTICE
FAST TRACK DIVISION
ACCRA –AD 2013
Source: Martin Amidu