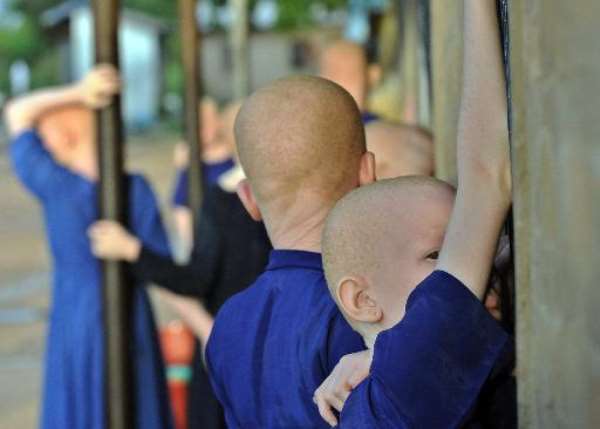 Dar es Salaam (AFP) - Their limbs hacked off and babies and children abducted or killed, albinos in Tanzania live in fear of another horrific spate of attacks against them ahead of elections in October.

Albino body parts are boiled up in foul human potions for witchcraft in the east African nation, and reports of killings have increased as local politicians order their spells in the belief that the expensive brews will secure poll victory.

"Local political leaders believe in the power of witchdoctors and think that it could help them to win elections," said Vicky Ntetema, director of Under The Same Sun, an organisation defending the rights of albinos in Tanzania.

With an entire corpse selling for as much as $75,000 (70,000 euros), Ntetema claims the high price is an indication that "some political and economic elites" could be involved in albino murders.

In one recent attack, a six-year-old albino boy's hand was chopped off with a machete and his mother assaulted as she tried to protect him.

At least 76 albinos have been murdered since 2000 with their dismembered body parts selling for hundreds of dollars, according to United Nations experts.

A further 34 albinos have survived after having parts of their bodies hacked off, and grave robbers have dug up at least 15 more albinos, seeking buried limbs and bodies.

Sengerema Simon, a 28-year-old man with albinism, was forced to flee his village in Tanzania's northern Tabora region fearing he would be attacked and cooked.

"In the village, I often heard people just call me 'the albino', then one day men I did not know called me by my name, saying they were going to do business... I was very scared," he told AFP.

Unemployed, he now ekes out a living in the commercial capital Dar es Salaam with help from the Tanzania Albinism Society.

Albinism is a hereditary genetic condition which causes a total absence of pigmentation in the skin, hair and eyes.

It affects one Tanzanian in 1,400, often as a result of inbreeding, experts say. Tanzania is home to some 49 million people.

Many attacks take place in northwestern Tanzania among the Sukuma people, the country's largest ethnic group and one with a long belief in witchcraft.

But experts say a thriving informal mining industry has also driven the killings, with prospectors desperate for anything that could help them strike it rich.

"The murders are connected to gold and diamond miners' efforts to secure lucky charms for finding minerals and protection against danger while mining," a 2010 report by the British-based Journal of Modern African Studies said.

In Africa, albinos generate a mixture of fear and fascination: some are stigmatised for their different colour, others treated almost as "divine figures," said Giorgio Brocco, an expert at Germany's Free University of Berlin.

"In some part of Africa, some ethnic groups originally believed that people with albinism disappeared instead of dying -- or that they are gods," Brocco said.

Not in Tanzania, however, where they have "mostly been discriminated against" because they cannot so easily take part in farming, as their skin burns in the fierce sun, Brocco added.

That stigma begins at birth, said Josephat Torner, 32, who has albinism and works for the country's Albino Society.

"When I was born, the community wanted to poison me. People thought I was a bad omen for the village... but my mother stopped them and saved my life."

Torner recalls how growing up he was ostracised for his looks.

"Children didn't want to play with me because they thought I could contaminate them, even my own brothers didn't touch my clothes for the same reasons," he said.

Campaigners say that education and raising awareness are vital in changing beliefs and prejudice.

"You may apply for a post of employment... you may have all the qualifications and experience, but you will never get employed because of negative attitudes," said Kondo Seif, who works for Under the Same Sun.

Seif, a top student at the University of Dar es Salaam, says he was denied a scholarship and teaching post after studying "because of my condition."

Still Seif is optimistic that attitudes are slowly changing, at least in urban areas.

"Bad reactions in a restaurant or a bar were very common in the past but not so much now," he said.

In March, Tanzanian police rounded up hundreds of witchdoctors in a bid to stem the albino murders.

But campaigners such as Torner -- who travels regularly around remote northern regions to raise awareness about albinism -- say that in the long-term, it will be education that will "eliminate the false beliefs."