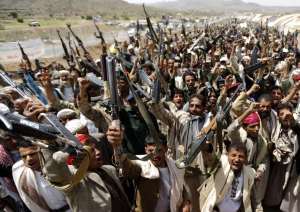 Many Arab and Middle Eastern countries, including Yemen, are on fire since 2011. The Houthi separatists in Yemen revolted against President Abed Rabou Mansour Hadi & forced him to leave the country. Hadi took refuge in a hideout in Aden, before fleeing to Riyadh, whereas the Houthi rebels have completely captured the capital Sanaa and large part of Yemen. This rebellion was brewing since 2011. It is to be noted that Al Qaeda and other Sunni militants took shelter in Yemen after they were repulsed by the American allied forces from Afghanistan.

Presently, Shia Houthi rebels in Yemen are faced with double challenges of Al Qaeda on one hand and legitimate Yemeni govt. of on the other. Saudi Arabia, along with its Gulf allies like UAE, Egypt, Kuwait, Qatar & Bahrain, has launched aerial offensive against Houthi rebels and started bombing them. Saudi Arabia claims to have taken this military action in order to protect the UN recognized Yemeni govt. from the assault of Houthi rebels. However, the real motive behind this military assault of Saudi to stop Iran-backed Shia rebels to take control over Yemen, its strategic backyard. It is also noteworthy here that Iran denies Saudi claims that it is providing any type of assistance to Shia Houthi rebels in Yemen.

It is believed that the US has an important role in this indirect confrontation between Saudi Arabia and Iran. It's a matter of thought as to why the Saudis and allies have not taken any action against the Sunni Wahabi ISIS led by Abu Bakr Al Baghdadi, who is committing heinous crimes against humanity across Syria, Iraq and other countries of middle east and calls for establishment of an 'Islamic empire'? Why Saudi and allies are not bombing the IS terrorists?

Another noteworthy point is why the US asked Iran for its support to fight against Sunni Wahabi ideology based IS? Two disparate faces of American strategy can be seen in Iraq and Yemen. While in Yemen, it seems to condone the acts of Saudi Arabia against Shia rebels, whereas in Iraq it is seeking support from Iran against IS. While Yemeni rebels are said to have been supported by Tehran, the IS fighters seem to have moral support from Riyadh. Iran's Deputy Foreign Minister Hussain Amir Abdul Lahiyan recently met the UN Secretary General and made an appeal to immediately stop military intervention by Saudi Arabia in Yemen. It has also warned that such uncalculated military actions are not in the interest of Saudi Arabia and this step of Saudi could risk the peace in the entire region. Iranian Minister has demanded that the UN should use its influence in Yemen and ask Riyadh to immediately stop aerial attacks against the rebels.

American role in Yemen can be gauged from the fact that last days an American media house CNN broadcasted news claiming that Pakistan has joined Saudi Arabia in its aerial offensive to crush Shia rebels in Yemen. 15 of its fighter planes are participating in the aerial attacks. Immediately after the broadcast of this news, the Defence Minister of Pakistan Khwaja Asif denied such reports, calling them baseless and stressed that Pakistan is not a part of Arab military coalition in Yemen. What was the purpose of the CNN to telecast such irresponsible news on behalf of Pakistan? Was that an American attempt to exploit Shia-Sunni divide by showcasing Pakistan in support of Arab countries and against Iran? Yemen's internal security situation is precarious. If Yemenis themselves couldn't find a timely solution out of this power struggle, then Yemen is destined to become a rogue state and a battleground for foreign powers. It can't be ruled out that eventually Yemen may become another Somalia. And if that happens, it will be seen as another successful outcome of American strategy in the Middle East.

Saudi Arabia is also worried by the softening of American stance vis-à-vis the Iranian nuclear programme. It is neither happy with the flexibility in Washington's policy towards Iran, nor is able to digest American-Iranian cooperation against IS in Iraq. Military intervention in Yemen by Saudi-led coalition is also an outcome of Riyadh's exasperation against Iran. Another interesting aspect of this entire episode is that even though the Western media is trying to label it as an example of Shia-Sunni tension; many Muslim countries and majority of the Muslims of the world don't tend to look at it from sectarian angle. A major section of the world's Sunni population also believes that the Muslims countries should get rid of such rulers who play puppet to America. Such Muslims also favoured the former Iranian President Mahmoud Ahmedinejad's stake against American hegemony. The same section of the Muslims was vocal against the cruelty and tyranny of Saddam Hussain, at the same time supporting his stand against the US. This section of Sunni Muslims is certainly against the Arab rulers who are puppets of America. But it has become the need of Arab rulers to adulate Washington in order to save themselves and their dictatorships from internal rebellion. On the other hand, the US, which otherwise pretends to be an advocate of democracy, has turned a blind eye towards tyrant Monarchs and dictatorship in the Arab world.

There is little doubt that had the Muslim world been united and there was mutual trust, then Palestine would have become an independent nation long ago and won't have to witness Israeli excesses time and again. Iraq, Syria and Afghanistan would neither have been destroyed this way. But, the Muslim countries fell prey to the American great game and started fighting amongst themselves. This Shia-Sunni confrontation in the form of Saudi-Iran standoff is an outcome of the same strategy. It is yet to be seen that for how long the Muslim world plays to the tunes of Uncle Sam.