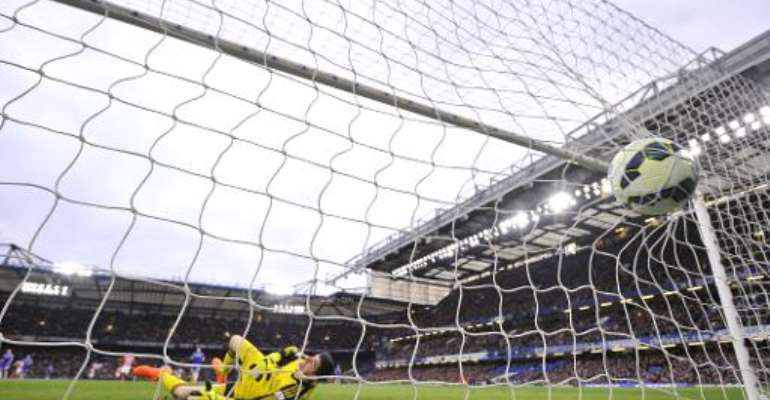 Nigerians Kano Pillars bow out of the 2015 CAF Champions League qualifiersd despite a 2-1 home victory over Moroccans Moghreb Tetouan. By Glyn Kirk (AFP/File)

Johannesburg (AFP) - Nigerians Kano Pillars bowed out of the 2015 CAF Champions League qualifiers this weekend despite a 2-1 home victory over Moroccans Moghreb Tetouan.

A four-goal first-leg deficit proved too heavy a burden for the northern team and they were eliminated from the premier African club competition 5-2 on aggregate.

Claims by Kano stars that they would stage a miracle recovery at the Sani Abacha Stadium were nullified after 33 minutes when Mouhsine Iajour put Tetouan ahead with his fourth goal of the tie.

It left the Nigerian champions needing six goals in 57 minutes -- an average of one every nine minutes -- to win the last-32 tie.

But the best they could manage was two goals courtesy of Tony Edjomareigwe just past the hour and a Rabiu Ali match-winner one minute from time.

This was the third consecutive early Champions League exit by Kano after a 2013 first-round defeat against AC Leopards of Congo and a preliminary-round loss to V Club of the Democratic Republic of Congo last year.

Their best showing in the competition came six years ago when they lost to fellow Nigerians Heartland in the semi-finals.

Concerned about Boko Haram-triggered violence in north-east Nigeria, the Moroccan club flew to the most populous African country in a jet provided by King Mohammed VI.

Tetouan, who scraped past Malians CO Bamako in the preliminary round, meet record Egypt's eight-time African champions Al-Ahly in the final qualifying round for the group stage.

Momen Zakaria scored in each half to give Ahly a 2-0 victory over Rwandan military outfit APR in a spectator-less Cairo stadium.

Authorities have barred spectators after at least 20 football fans were killed last month during a stampede following clashes with security forces in the Egyptian capital.

Ahly took a two-goal lead into the return match and any hope of an APR comeback was dashed on the half hour when recent signing Zakaria put the Red Devils in front via a header.

He struck again just after half-time, tapping in a rebound after a Saad Samir header had been blocked.

Stade came from behind to win 2-1 against Gabonese visitors Mangasport in Bamako and complete a surprisingly comfortable 5-2 overall success.

Merrikh fell 2-1 away to Angolans Kabuscorp, but the 76th-minute goal from Bakri Al-Madina in Luanda proved decisive as it gave his club a 3-2 aggregate victory.