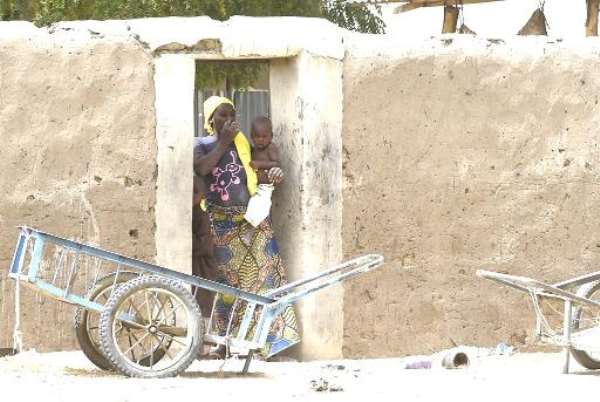 Malam Fatori (Nigeria) (AFP) - The black letters crudely painted on a wall at the entrance to the devastated town of Malam Fatori, in northeast Nigeria, spell out "God is great" -- a calling card from the evicted Boko Haram fighters.

Niger and Chadian army troops, working together in support of Nigerian forces, recaptured the town on Tuesday to find grocery stores vandalised, smoke-blackened walls and motorbikes and wheelbarrows lying abandoned on the ground.

Silence reigns in the clay-built houses of the desert town which has become a virtual ghost town, with only a few stray cattle roaming the streets.

Suddenly a gaunt old man in a long ochre-coloured robe appears from behind a burnt-out house.

When the Islamist fighters saw the troops arrive "they drove us out of our homes and burnt everything down before fleeing," he said, speaking in the regional Hausa language. "They didn't want to leave anything behind."

Stalls at the nearby market, once the nerve centre of this trading post less than four kilometres (three miles) from the Niger border, stand empty, their contents all looted.

Boko Haram attacks and suicide bombings in northeast Nigeria have claimed more than 13,000 lives since 2009.

The militant group has moved beyond Nigeria's borders in recent months, staging increasingly brazen attacks in Chad, Cameroon and Niger that have prompted Nigeria's neighbours to launch a joint military offensive in response.

The regional fightback, concentrated in Nigerian border areas south of Lake Chad with Nigerian troops operating further inside the northeast, seems to have stopped the militants' advance for now.

Almost all of the 30,000 residents of Malam Fatori left the town when Boko Haram fighters seized it last November.

"Me, I couldn't go, I'm too old and too sick," the wheezing old man told AFP.

A few women and children were forced to live with the insurgents for almost five months.

"We had to ask their permission for everything. They watched all our comings and goings," he said of the Boko Haram insurgents.

When troops of the Chad-Niger military alliance arrived in Malam Fatori on Tuesday the Islamists had already left and the town was retaken without a shot being fired.

Local shepherds saw Boko Haram fighters leave with "a group of naked women," said a Niger soldier on patrol in the recaptured town.

"This is a common tactic to prevent women from escaping, they were totally undressed. We found a lot of women's clothes," he added.

The day after the troops moved in, an army patrol on "mopping up" operations some 10 kilometres from the town was ambushed by Boko Haram rebels, one young soldier explained.

The official death toll was one Niger and nine Chadian soldiers along with around 150 of the Islamist insurgents.

The soldiers in the Chad-Niger alliance, fearing more insurgent attacks, have "planted mines everywhere" in Malam Fatori, and are camped a few hundred metres from the entrance to the town, their tanks, heavy artillery and gun-mounted jeeps creating an imposing deterrent.

"These people are concealing themselves for an attack, to carry out small ambushes... but our forces have been on high alert and we've neutralised them," said Chadian army Chief of Staff Brahim Seid, on a visit to congratulate the soldiers on their battlefield achievements.

Malam Fatori was "the biggest stronghold of Boko Haram in northern Nigeria and it was imperative to destroy that," General Seid added.

Chadian and Niger troops made the town a primary target once they entered Nigeria on March 8, marking the start of foreign military operations on the home territory of the Islamist sect.

"It is now for our Nigerian partner... to take possession" of the towns recaptured from Boko Haram, said Niger army chief Seyni Garba.

With his Chadian counterpart, he called for greater "coordination" with Nigeria, stressing that the Chad-Niger joint force does "not intend to occupy" these areas.

Nigeria's President-elect Muhammadu Buhari on Wednesday vowed to rid Nigeria of the "terror" of Boko Haram after an historic election victory late last month which marked the first democratic transfer of power in Africa's most populous nation.