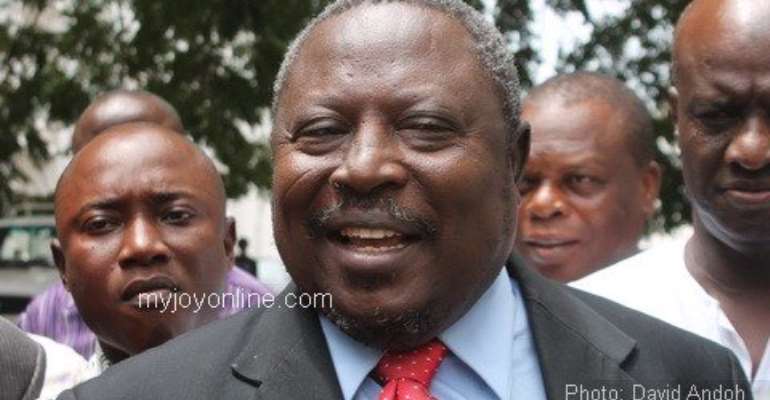 Former Attorney-General Martin A. B. K Amidu says contrary to claims in the media, construction firm Waterville Holdings is to refund to the state, €47,365,624.40  and not €25m.

Mr. Amidu in a statement issued in Accra Friday and copied to Myjoyonline.com, said there were two components of the Supreme Court decision directing Waterville to refund it illegally obtained from the state.

A number of Ghanaians have called me to ask how much Waterville is to refund to the Republic of Ghana as a consequence of the decision and orders of the Supreme Court dated 14 th June 2013. This is apparently because of late the media has carried the story that Waterville has taken the Government to international arbitration to challenge an order for the refund of €25 million made by the Supreme Court. No explanation appears to be coming from Government sources to indicate the total amount of refund to be made by Waterville is €47,365,624.40 . I have therefore deemed it necessary to address this issue relating to the Waterville decision and order as the citizen public interest Plaintiff in this matter.

The Supreme Court formally granted the Attorney General capacity to enforce the judgments debts and related matters on 31 st March 2015. This is after almost two years of delay on the part of the Government to ask for that direction from the Court. My views on the delay in making the application and why I think it has the tendency to frustrate future citizen public interest plaintiffs is contained in my affidavit filed on 30 th March 2015 to the Attorney General's motion for leave to enforce the decisions and order. I was the only party to file an affidavit in answer to the Attorney General's motion for leave to enforce the judgments and orders in the case and the public has a right to know my views as the public interest citizen plaintiff. I will at least be sending a soft copy of the affidavit to the media as an attachment. The certified true copy of the directions given by the Supreme Court on 31 st March 2015 was not available to me at the time of writing this but I will post a copy on my website for public consumption as soon as I get a copy.

I pray that the delay in taking steps to enforce the judgments and orders in this case does not affect the ability of the Republic of Ghana to retrieve all sums involved with the accompanying interest.

My views and conclusions on the judgment debts are as they appear here under.

THE WATERVILLE CONTRACTS AND PAYMENTS
The Waterville contract and payments have two components or aspects.

The 1 st Component of the Waterville Contract

The first component or aspect was the payment by the Government of Ghana of €22,365,624.40 as certified by Building Industry Consultants Ltd (BIC) to Waterville through the sub-contractors. See pages 4 to 5 of the Supreme Court judgment dated 14 th June 2013. See particularly the finding of the Supreme Court on the last paragraph of page 5 which states that: “The value of the work previously undertaken by the 2 nd defendant was duly confirmed by the consultants for the project, Building Industry Consultants Ltd (hereafter referred to as “BIC”). The Government of Ghana subsequently paid for all the work certified by BIC, totaling some €22,365,624.40. This payment was problematic since it appears to have used a restitutionary route to bypass the legal consequences of an inchoate international business transaction to which the Government was a party, which had not been approved by Parliament in terms of article 181(5).”

On page 37 of the judgment the Supreme Court after reviewing the case against the 2 nd Defendant, Waterville, from pages 33 said at pages 37 in respect of this aspect of the case as follows: “This is an extraordinary account of the State's view of its liability to the 2 nd Defendant. In our view, it was fundamentally erroneous in ignoring the effect of article 181(5) of the 1992 Constitution. From the analysis earlier made of the penumbra effect of article 181(5), we affirm that there is no liability of the State to 2 nd defendant. The 2 nd defendant is thus obliged to return all monies paid to it pursuant to the transaction…….”

On page 33 to 34 the Supreme Court states that: “The Governments action in paying the 2 nd defendant for the work it did prior to the conclusion of the terminated 26 th April agreement was unconstitutional, according to the analysis set out above. According to the plaintiff's averment in his Statement of Case, verified by affidavit: (Court quotes paragraph 22 of the Statement of Case and continues on page 34)

This explains why the Supreme Court stated as follows: “Relief 14 is granted to the extent that the order is directed at the 2 nd defendant, requiring it to refund to the Republic of Ghana all sums of money paid to it in connection with the two inoperative Agreements dated 26 th April 2006 and the work done on the stadia (emphasis supplied).” It is clear from the foregoing that to remain silent with this information to the public on this quantum of the judgment debt when Waterville goes to international arbitration is to curtail the reach of the Supreme Court decision and order in respect of the work done and paid to Waterville in the sum of €22,365,624.40.

The 2 nd Component of the Waterville Contract

The second aspect of this contract apart from the certification of BIC and payment for the alleged work undertaken by the 2 nd defendant, Waterville, and paid for by the NPP Government was the claim made by the 2nd defendant in the letter dated 9 th Mach 2009 to NDC Government leading to mediation and payment of €25million to Waterville. See pages 6 to 7; and pages 33 to 41.

The total amount to be refunded by Waterville in accordance with the decision of the Supreme Court that: “Relief 14 is granted to the extent that the order is directed at the 2nd defendant, requiring it to refund to the Republic of Ghana all sums of money paid to it in connection with the two inoperative Agreements dated 26 th April 2006 and the work done on the stadia.”: is restitution paid for the work done on the stadia as certified by BIC and paid for €22,365,624.40 and mediated payment of  €25million making a total refund of a payment of €47,365,624.40.

PAYMENT OF INTEREST ON THE SUMS TO BE REFUDED BY WATERVILLE

The Supreme Court inadvertently did not direct the payment of interest to the Republic in the above cases but corrected this in the Isofoton case when it specifically ordered that: “3. Interest is to be paid on the sum adjudged above from date of its receipt by the 2 nd defendant, in accordance with the Court (Award of Interest and Post judgment Interest) Rules 2005 (CI 52).” The Republic of Ghana is entitled to interest on the amounts paid to Waterville and the motion for leave to enforce the decision and orders of the Court shows that interest has to be claimed on the total amounts from date of receipt to date of payment.

CONCLUSION
No matter the insults and name calling by the Government and my own political party, the NDC, nothing will stop me from pursuing this GARGANTUAN constitutional rape on the people of Ghana to its logical conclusion as long as I have life in me. Putting Ghana First instead of Governments is the only salvation for this our dear Republic.