NPP UK Calls For Party To Hold Itself Ready And Prepared To Lead! 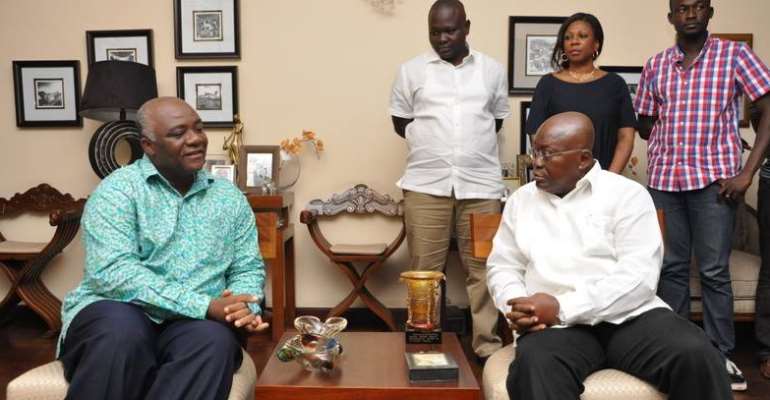 The Chairman of NPP UK Michael Ansah has made a call to Party members to stand “ready and prepared to lead, ready to govern, and ready to show themselves worthy of the trust of the good people of Ghana”.

Speaking on Sunday at the UK Branch Annual General Meeting held under the theme “Uniting and Working for Power”, Michael Ansah called on Party members to “lift their heads above the parapet” and focus collectively on how they stand “shoulder to shoulder to wrestle power from the bankrupt Mahama administration that has plunged Ghana to unknown depths of economic chaos”.

In his Address to the Branch, Michael Ansah observed that the “case for change in Ghana”is now without question. There is untold hardship. The Government of the day is rudderless, staggering from one crisis to another. Ghana he indicated is facing the worst period of economic mismanagement the nation has ever seen with unprecedented high levels of national debt, a fast depreciating currency, and rampant institutionalised corruption! Under these conditions Ghanaians deserve better, and the case for change has never been clearer – “It is time to renew, time to refresh. We need a new inspired government that will govern in the interest of hard working people of Ghana, a new government that by example of leadership will be serious about rooting out corruption from the fabric of our society, and a new government that will instil trust in the administration of our country. This is a change that an NPP government, under the leadership and Presidency of Nana Addo Dankwa Akufo Addo will deliver” he declared to loud cheers from the gathered audience.

The AGM, which coincided with the first anniversary of the new leadership of NPP UK, was attended by a large number of Party members and sympathisers including present and past executives, members of the council of elders, and members from established and emerging Chapters across the UK – Manchester, Milton Keynes, Midlands, Leeds, Northampton, Hull, Reading and Swindon. The Party is expanding across the UK through its network of Chapters, several of which will be inaugurated this year, in line with the stated objective of growing the network of 10 Chapters by the end of 2015.

The meeting was an opportunity to review the activities of the past year, and to set out plans for 2015, as the UK Branch gears up in readiness to actively support the Party in Ghana to prosecute election 2016 and deliver victory.

Turning to the Party, and looking back to 2014, Mr Ansah stated that he and his leadership team's objective through the year has been “to build a Branch that will build on the good foundation laid by the previous administration, function effectively, establish trust, and work to broaden the Party's appeal – re-branding, reshaping and re-telling our story”. He noted that the Branch had made notable strides, and we will continue along this path.

During the year,NPP UK focused on the expansion of our Branch network, strengthening the Chapters, increasing our collaboration within Ghanaian communities across the UK, and mobilising resources. The Branch hosted a number of visiting dignitaries to the UK including His Excellency President JA Kufour, Dr Bawumia, the 2016 Vice Presidential Candidate, and leading Party officials including the Chairman, Paul Afoko and General Secretary Kwabena Agyapong as well as several Members of Parliament.

The major highlight of the year was the distinct privilege of welcoming and hosting the Leader and 2016 Presidential Candidate Hon. Nana Addo Dankwa Akufo-Addo in December, when he attended a mammoth rally in London. This event, at which he spelt out his “vision of a transformed Ghana”, was attended by members from London, the Chapters and the general public, and fittingly crowned activities for a successful year.

Mr Ansah also thanked Party members for their commitment and hard work, and commended the achievements of the Branch's Secretariat and Organisers, Communications and Research Departments, Organs and Wings, and the Treasury, in remaining resolute and executing the programme of the branch through a challenging year.

The AGM allowed the Branch to unveil plans for 2015. This is to focus activities and resources on ensuring that the Branch will provide effective support to the 2016 Presidential Candidate and his Running-Mate, Parliamentary candidates, and the Party, to deliver a decisive victory in the 2016.

The plan is fully anchored on active collaboration with international branches, the National Party, and the Office of the flag-bearer and Presidential Candidate of the NPP, to ensure Branch work in sync and with singleness of purpose with all, to prosecute election 2016.

The rallying cry and clearly declared intent, set the tone for the Party faithful, and ushered in what will be a busy year for the Branch.