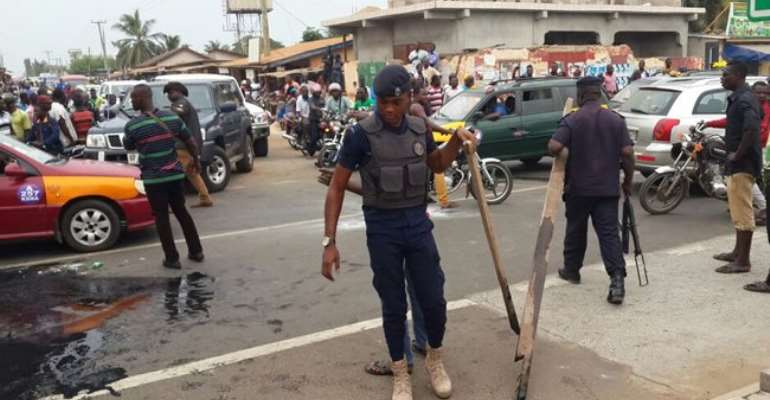 It has been revealed that the seven fugitives who absconded while on remand, literally walked out of jail as there was no policeman on duty that Friday dawn.

Explaining the circumstances, Joy News' Ivy Setordzie says two Nigerians came to the cell where the fugitives were held and after opening it, directed the fugitives to jump into a car waiting just outside the cell.

This was revealed after a team of police personnel led by Volta regional Commander Peterkin Gyinae led  three recaptured prisoners to the cells to describe how they managed to escape.

The prisoners, who spoke in Ewe, say they contracted two Nigerians and a few other persons from Aflao to orchestrate their escape.

This revelation could worsen the case of two policemen who have been interdicted for negligence.

The policemen who were supposedly on duty were interdicted after a 10 days ultimatum given to them to re-arrest the suspects passed.

The four suspects, who were re-arrested thanks to a tip-off from an informant, have been remanded and are under tight security.

A bloody encounter between the police and the suspects yesterday at Agbozome in the Volta region saw three other accomplices also arrested.

The others are in Togo according to intelligence information passed on by Togolese police to Ghanaian counterparts.

Denu residents were incensed after the remand prisoners, on suspicion of robbery,  broke jail on March 13 Friday dawn.