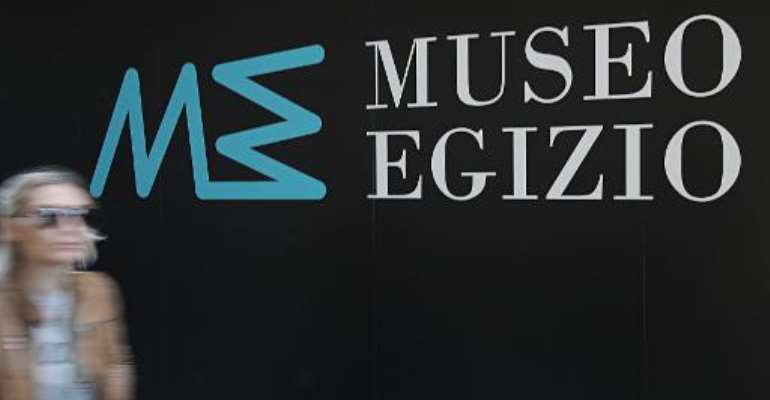 A visitor at the Egyptian Museo delle Antichita Egizie in Turin, the only museum other than the Cairo Museum that is dedicated solely to ancient Egypt art and culture, on March 31, 2015. By Marco Bertorello (AFP/File)

Turin (Italy) (AFP) - Huge black and gold sarcophaguses with kohl-rimmed eyes dwarf visitors at Turin's palatial Egyptian museum, which is reopening to the public after a "pharaonic" five-year renovation.

What was it like to be an early 20th-century explorer, stumbling across the ancient tombs of pharaohs and dignitaries and unearthing the mummified bodies and treasures within?

Now visitors donning 3D glasses in the museum in northern Italy will be able to explore a reconstruction of the tomb of Queen Nefertari, Ramesses the Great's favourite wife, as well as that of another tomb and a cult chapel.

The red-brick building in the heart of Turin's historic centre, built as a Jesuit school in the 17th century, has undergone a 50 million euro ($53.7 million) makeover that has doubled its exhibition space to 12,000 square metres (129,000 square feet).

"The (refurbishment) works were really pharaonic. This renovation is not the end of the journey, but the beginning," museum director Christian Greco told a press review Tuesday.

"The Egyptian museum will become a great international museum once again," he said.

One of the top 10 museums in Italy in terms of visitors -- with over half a million people through its doors in 2014 -- it is opening to the public for free on Wednesday, one month before this year's Expo begins in nearby Milan.

Organisers hope some of the millions of visitors expected in Italy's economic capital for the six-month Expo will be enticed to add Turin -- and the world's only museum outside of Cairo dedicated entirely to Egypt -- to their itineraries.

The star draw is clearly the new sarcophagus gallery, where varnished wooden or stone burial casings sporting intricate hair braids and long goatees stand with their arms crossed, and a mummified body lies curled on its side.

A large part of the museum's current display of statues, papyrus texts, sarcophaguses and mummies were bought in 1824 by King Carlos Felix (1765-1831), king of Piedmont-Sardinia and of the House of Savoy.

They were part of a collection put together by Bernardino Drovetti, a Piedmontese diplomat and antiquarian appointed French Consul to Egypt by his companion in arms, Napoleon.

Sniffed at by France, the collection was offered to Italy -- and archaeologically savvy Carlos Felix jumped at the chance.

Egyptology at the time "was very in fashion. The public were discovering these objects that were so new, that told an obscure, far-away story," Beppe Moiso, one of the museum's eight curators said.

French scholar Jean-Francois Champollion, known primarily for deciphering the Egyptian hieroglyphs on the famous Rosetta Stone, studied the Turin collection when it was first put together.

From the 8-metre (26-foot) long papyrus of the Book of the Dead -- now on display behind glass -- to the food preserved from ancient tombs, Champollion was so impressed, he said that the "road to Memphis and Thebes passes through Turin."