Congratulations To My Fellow Country Men And Women! 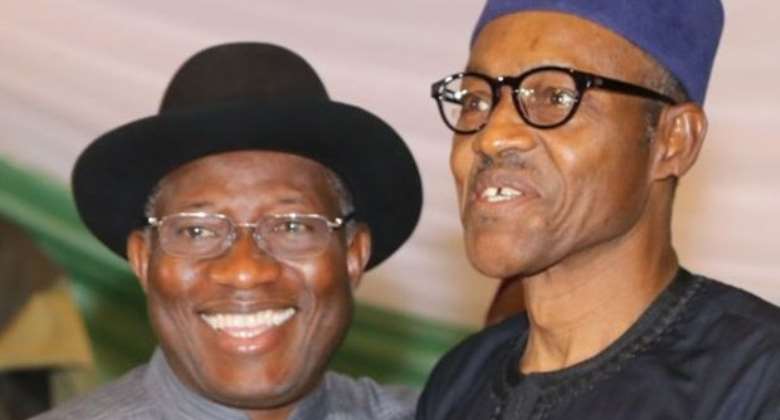 On Tuesday, March 31, 2015, almost all Nigerians from all walks of life were glued to their TV sets, listening to the radio or busy browsing the internet to be abreast with results of the just concluded presidential and National Assembly elections, as they trickled down to INEC's general election situation room/National collection Center at the International Conference Center (ICC), Abuja.

As presentations of result by various INEC's returning officers from the 36 states and FCT were being collated and presented, the feelings at the moment was that of anxiety and fear of defeat as hearts were pounding in quick successions.

Even before the arrival of the final result from Borno state, General Buhari was far ahead of the incumbent president with over 2 million votes. It was during this tensed and rather overcharged atmosphere that president Jonathan called and congratulated his main challenger, the flag bearer of the main opposition All Progressive Congress (APC), General Muhammadu Buhari on his electoral victory. By conceding defeat before the last leg of the results were counted and announced by the nation's electoral umpire, President Goodluck Ebele Jonathan's fortune has changed from his hitherto most criticized president to the most celebrated, revered and love president in the recent history of Nigeria. Mr. President did indeed take the whole nation by surprise with this rare and highly commendable sportsmanship.

Further, he certainly made history by presiding over the most peaceful, credible, and free and Fair elections in Nigeria. The President has won the admiration of Nigerians and the international community. Jonathan's statesmanlike solution of the present political perplexities in our country is commendable and will go down in history as the long awaited critical juncture that we have been struggling to establish. He has set precedence. No Nigerian politician has conceded defeat before the official announcement of final result and congratulated his challenger in the history of our country. As from now, no incumbent president will take Nigerians for granted and sit-tight in the comfort of Aso presidential Villa to scuttle the electoral process in the future. For this singular act of altruism, the name of President Jonathan will boldly be written in gold in the annals of our history as the man who deepens our democratic values and principles. We cannot deny him the enviable position of number one agent of change for accepting defeat gracefully.

Courtesy of Mr. Jonathan's exemplary sportsmanship, Governor Ayodele Fayose of Ekiti state, the man who had wished Buhari death and one of the staunchest and fanatical critics of the President elect also took cue from Mr. Jonathan's humility and meekness. Speaking through his adviser on communication and the new media, Lere Olayinka, fayose urgrd Nigerians to accept the outcome of the Saturday Presidential election in good faith. The governor further praised the President for laying the most solid foundation for democracy in Nigeria, adding that '' general Buhari is a resilient and dogged fighter.''

The 2015 presidential election has produced a president who has the nation at the bottom of his heart. He sees beyond his nose. He symbolizes uprightness and integrity. His focus is always Nigeria first before any other consideration. Man of the moment, the president elect, General Muhammadu Buhari, is the most popular, incorruptible, and altruistic Nigerian politician alive today. His electoral victory is undoubtedly auspicious. So also the expectation from Nigerians is high.

The task ahead of the president elect is daunting. The 16 years of PDP maladministration and mindboggling corruption has bastardized the economy. The failure of Mr. Jonathan's led PDP government to suppress the merciless and deranged Boko Haram terrorists from the monster it has become will not be an easy work over. The silly but fatal mistake made by Jonathan to empower former militants with lavish contracts to man our territorial waterways is a ticking time bomb. The PDP led government will hand over to Buhari a dark nation which has failed to supply simple electricity to the people, despite the huge investment injected into a conduit pipe called power sector reform. The multitudes of Nigerian youths who defied all odds and came out and voted for Buhari, most of whom are unemployed, look up to ACP led government to create jobs for them. The over 3 million Nigerians who were displayed by incessant terrorists attack in the North East would want the next president to rebuild their destroyed towns to enable them return and resettle in their homes. Nigerian soldiers have been rubbished by the superior fire power of the dreaded Boko Haram in the past. Their confidence to fight has been eroded. They look forward to the new government to lift their spirit.

General Buhari has promised Nigerians that he will be a succor and solution to many of their problems. No sincere Nigerian will doubt GMB's resolve and passion to right the wrongs inflicted to Nigeria and its people. The onerous is on Nigerians to give him the chance to actualize his passionate dream to turn around the economy and rejuvenate other sectors for maximum growth. He proves that he has the interest and the political will to fulfill his promise

The electoral victory of General Muhammadu Buhari is victory for Nigeria. We should therefore give him the chance to fulfill his promise to assemble a team of hardworking and selfless Nigerians to work hard and fast for the recovery of the nation's wasted resources and self-respect. ''Our children will go to school and they will return safe.” ''Corruption will be a thing of the past and we will ensure that wealth goes around our citizens in an equitable manner.” “Government will conduct itself in a disciplined and responsible manner; we will identify problems and fix them, Buhari told the nation when flagging up his campaign in port-Harcourt. We therefore hope and pray that the almighty Allah will give the president elect the strength and wisdom to chart a new course for our country.

Once again, congratulations over GMB's victory at the polls, my fellow country men and women