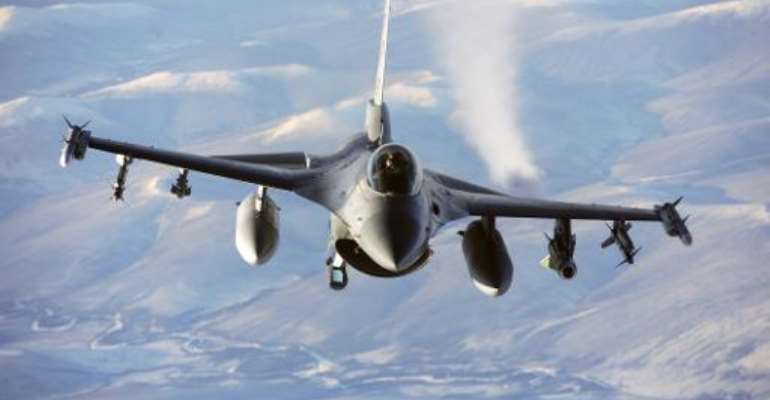 This US Department of Defense photo shows an F-16 Fighting Falcon aircraft as it flies over the Pacific Alaskan Range Complex on October 16, 2008. By Jonathan Synder (DOD / US Air Force/AFP/File)

Washington (AFP) - US President Barack Obama has approved the delivery of a dozen F-16 aircraft to Egypt that had been frozen after a military-led takeover.

The White House said Obama told Egyptian President Abdel Fattah al-Sisi by phone on Tuesday that a 2013 freeze would be lifted.

The move comes as Egypt plays a key role in the Arab offensive against Iranian-backed Huthi rebels in Yemen and engages in the fight against the Islamic State group in Libya.

The decision would help "create a US-Egyptian military assistance relationship that is better positioned to address the security challenges of the 21st century," said National Security Council spokesperson Bernadette Meehan.

Aside from the high-tech war planes, Obama also agreed to deliver 20 Harpoon missiles and up to 125 M1A1 Abrams tank kits.

The new Egyptian authorities insist they acted to maintain order amid mass protests against a government that had lost popular support.

Critics branded the move a coup.

Hundreds of supporters of Morsi and his Muslim Brotherhood have been killed and thousands imprisoned in a government crackdown.

Rights groups accuse Sisi of installing a regime more repressive than the one of former longtime strongman Hosni Mubarak.

Mubarak was toppled in early 2011 after an 18-day uprising, leading to years of unrest.

Islamists revile Sisi, but he is popular among Egyptians who say the country needs a firm hand.

Washington annually offers about $1.5 billion in aid to Egypt, including $1.3 billion in military aid.

Around $650 million in military aid was frozen after Morsi's overthrow.