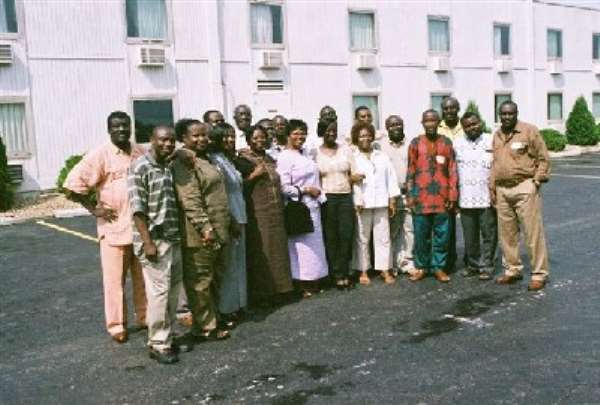 The North American chapter of the Osei Kyeretwie Secondary School (OKESS) Alumni Association recently held its annual meeting at Columbus, Ohio. OKESS alumni from Canada and the United States converged at Ramada Inn on Zumstein Drive, Columbus to renew friendships, share their life stories, reminisce about the good old times at OKESS and, above all, to discuss recent events at the school and the role of the alumni in moving the school forward.

The thrill on member's faces as they saw and hugged class mates they hadn't seen for years, some as long as thirty years, was something to behold. No less electrifying were the “oohs” and “aahs” as people saw themselves in black and white photos mounted on two large boards from that era at OKESS when, as teens, members naturally felt on top of the world. Those photos brought back wonderful memories for many members, who shared these during the session titled "Reminiscences of an Oheneba - a "confessional" of sorts during which members recounted all those pranks, “heroic” acts of truancy, the endless teasing, name-calling and sundry teenage shenanigans we all thought were so “cool” during our days at OKESS. That session proved so hilariously successful organizers are considering making it a permanent part of the annual meeting.

On the substantive issues facing the school, members expressed concern about the fact that more than 30 years after the late Otumfuo Opoku Ware II allocated several acres of land at Tafo for the development of a new campus, OKESS is still operating on two campuses, neither of which has seen any infrastructural improvement of any significance over the years. Members were equally concerned by and discussed ways of reversing the poor performance of OKESS students at several recent national examinations.

Members welcomed the decision of the school's administration to consolidate both campuses at the new site effective the next academic year. With the concerns described above as the backdrop, members donated or pledged about $8,000 towards the construction of a girls' dormitory, work on which has been started by the Ghana chapter of the OKESS Alumni Association. The organizers hope that other OKESS alumni, particularly those in North America who could not attend the meeting will contribute generously to the fund-raising effort to improve the physical appearance of the campus and help ease the strain on students and teachers who are currently bused back and forth between the two campuses every day.

Members expressed gratitude to the Parent-Teacher Association (PTA) for funding the construction of a classroom block that is nearing completion. Members also commended the first headmaster, Mr. George R. Bray, for his foresight in securing the site for the new campus and for his leadership of the school. The meeting decided to work in collaboration with the UK/European and other chapters in the Diaspora in funding capital improvements and infrastructural developments at OKESS.