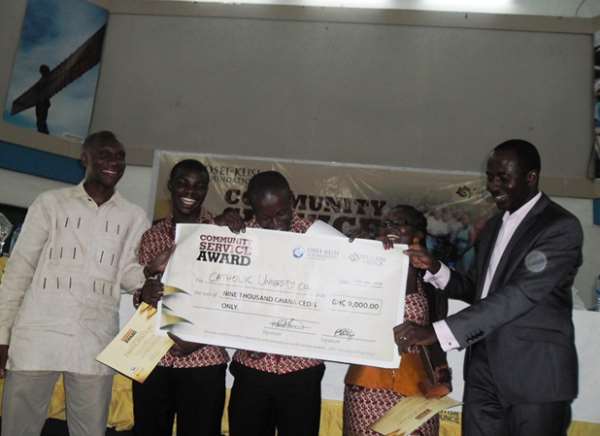 The 2015 Community Service Award Scheme by Osei-Kusi Foundation (OKF) and Selfless 4 Africa (S4A) has been opened for applications from all Tertiary Students across the country.

Launched last Friday in Accra, the scheme which counts as the second edition, aims at cultivating a spirit of volunteerism and community service among young people.

A student group of 3 or 4 people with a name and a research proposal to solve a problem to the benefit of young people in a particular deprived community are the terms and conditions to qualify one to apply.

Last year, out of the applications received from 20 tertiary institutions, students from catholic University College received the award money of 9, 000 to establish a bakery for young women in Nankitiwa, a deprived community near Sunyani.

This year's cash prize for winners which has been upped to GH¢10, 000, a GH¢1000 difference from last year's and a training for the short listed groups to groom them as preparations to execute their projects, make this year's scheme different from the maiden one.

Dr. Kofi Osei-Kusi, the Executive President of OKF, during the launch of the Award Scheme indicated that they expect innovative proposals which would exceed last year's proposals and make a difference in the lives of the young.

He explained that the training session which was added to this year's programme was to better equip the winners to execute their project without challenges.

According to the Executive President, Students can apply by downloading and completing application forms from the Foundation's website.

Project / Finance Manager for OKF, Miss PanyinBenefo, was of the view that the projects that churned out from the cash prizes given the winners in its small way compliments, government efforts in accelerating the country's development.

Realizing that the scheme brought out the spirit of volunteerism and innovations from students to do greater works in the future, she encouraged all students to believe themselves and partake in the upcoming event.

Mrs. KakraBenefo Asante, Youth Coach & Partnership Manager on her part observed that the Scheme was developing both young people and deprived communities.

She pointed out that, by the results that come out from the awards, she was right to say they are carrying out the responsibilities of huge companies and the government.

Mrs. Asante thus called on Philanthropists, Companies, and other Non-GovernmentalOrganisations (NGO), to emulate the efforts by OKF and S4A.

The Osei-Kusi Foundation (OKF) is a development and resource organization helping to transform thousands of young people by providing them with tools, resources and training they need to make a global impact. The vision of the Foundation is to help young people discover their purpose and maximize their potentials. It has for the past 3 years contributed significantly in tackling the development deficit facing the youth. Over 250, 000 lives have been touched so far through various interventions.

Selfless4Africa (S4A) is a non-profit organization, based in the US. It was formed with the goal of challenging people in Africa and elsewhere to perform acts of Selflessness in their communities, which builds up a domino effect of selflessness that changes the status quo poverty, ignorance and corruption in the continent.

S4A in partnership with OKF is using the Community Awards as a medium to reach University students in Ghana and to identify young people who aspire through innovative community based projects to transform the lives of individuals in their locale and gain invaluable leadership skills and experience.

The Surge Team from Catholic University won the maiden edition of the award scheme.