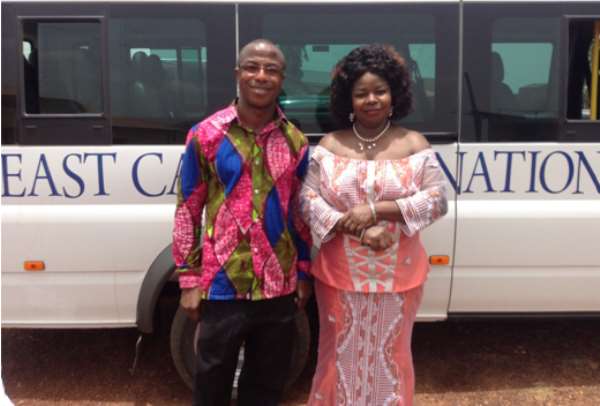 The Akuapem campus of the Presbyterian University College of Ghana (PUCG) and Breast Care International (BCI) are working on an agreement which would pave way for the university to educate people within catchment areas or communities of the university on breast cancer issues.

The agreement expected to be completed before the end of the year would raise the awareness of breast cancer among people in some of the districts in the eastern region such as the Akuapem north and south.

Speaking to Dr Edward Wiafe, the Dean of Faculty for Development Studies, PUCG, Akuapem campus in an interview, he says the faculty apart from its traditional teaching and research duties, also aims to educate catchment community members on environment and development issues, but cannot be accomplished when the people are not healthy.

''When you go to the remotest part of the districts we will organise such programmes to educate them on the myth associated with the disease. Many people think that they get breast diseases out of curse, but naturally though as it is now research have not come out with the causes, it still in speculation that the environment in which the people live is part of it,'' Dr Wiafe noted in the interview during a breast cancer awareness programme organised by the student body's women commission in Akropong.

“People do not accept the fact that breast cancer is a normal disease like malaria, but they associate it with the devil. Coupled with some pastors who also preach that you cannot get such a disease unless you are cursed. Moreover there are some people who cannot afford to go the cities for screening, so when they get there they will use the opportunity to screen such people who have the potential to get the disease,'' he added.

As part of the agreement the university would mobilise the people and also cater for the financial aspect of the programme while the BCI would also provide the technical knowledge and expertise.

''The early detection is the key, so if the breast cancer is detected early the better than for it to reach an advanced stage because the cancerous cells multiplies and grow so when it starts from the breast it can multiply and grow throughout the body and before you realised it will be too late. It is curable and Ghanaians need to accept that fact,'' Dr Wiafe emphasised.

Dr Wiafe says the BCI normally organises oncology training for people and once it takes off willing students would be sponsored to attend such training so that during internships the students can organise such forum to educate women.

The president of Ghana, John Mahama every year takes part in a health walk to create awareness about breast cancer but nationally there should be much support to address the disease, he says.

The president of BCI, Dr Beatrice WiafeAddai said educating the youth would help to reduce breast cancer in the country.

''The incidence of breast cancer is on the rise globally and our situation is even bad because a lot of people are not educated and that is why educating the youth is so important because they will grow up with the knowledge to educate their mothers, which should be done by the nation as well not alone by universities or non-governmental organisations,'' she says.

Dr Wiafe say her outfit intends to visit all senior high schools in the country to educate them about breast cancer.

The Women's commissioner of PUCG, Akuapem Campus, Barbara BoatemaaGyan says the students expressed interests in breast cancer given the magnitude of the problem at the globally and national levels.

''Lots of women came for the programme and each students was willing to go through the screening process. The programme should be encouraged in various schools to offer students the knowledge about the breast cancer,'' she said.