Close race between Jonathan and Buhari in tense Nigerian elections

By Ola Awoniyi with Joel Olatunde Agoi in Port Harcourt 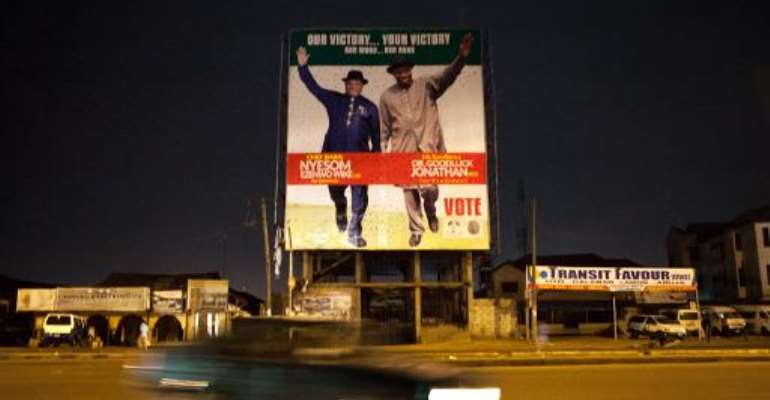 A car passes in street of Part Harcourt, Nigeria, on March 30, 2015, in front of a campaign billboard of incumbent President Goodluck Jonathan. By (AFP)

Abuja (AFP) - Opposition leader Muhammadu Buhari had a slender lead over President Goodluck Jonathan in Nigeria's knife-edge general election on Monday with just over half of all states declared.

The tense presidential vote pitting Jonathan against the former military ruler Buhari is the closest in Nigeria's history, and the first with a credible opposition challenge.

Buhari and his All Progressives Congress (APC) had won 10 states, with Jonathan, of the Peoples Democratic Party (PDP) taking eight plus the Federal Capital Territory of Abuja.

The 72-year-old defeated Jonathan by nearly 1.7 million votes in the key northern state of Kano, which has been among the hardest hit by Boko Haram violence, and he took similar leads in Katsina and Kaduna.

But the 57-year-old president clawed back ground in his traditional stronghold, winning massively in southeastern states as well as the religiously mixed central state of Plateau.

Buhari had so far won just over 8.5 million votes, about two million ahead of Jonathan with populous states such as Lagos and Rivers yet to declare.

Announcement of results was adjourned until 0900 GMT on Tuesday.

Violence has often flared in previous Nigerian votes after the winner is announced and the United States and Britain warned against any "interference" with the count.

"So far, we have seen no evidence of systemic manipulation of the process," US Secretary of State John Kerry and British foreign minister Philip Hammond said in a joint statement.

Jonathan's campaign spokesman Femi Fani-Kayode told reporters in Abuja that the claims were "absolutely balderdash" and challenged Kerry and any other foreign powers to provide evidence.

Nigeria's central Kaduna state, one of the areas worst-affected by violence four years ago when some 1,000 people were killed in post-election clashes, was said to be calm.

Awwal Abdullahi Aliyu, president of the Northern People Unity and Reconciliation Union, welcomed positive statements from foreign observers about the conduct of the election.

But he warned that places such as Kaduna remained a powderkeg and could "catch fire", particularly if electoral fraud is suspected in any ruling party victory.

Some 2,000 women protesting against the conduct of the elections were teargassed as they tried to converge on the local electoral commission offices in the southern oil city of Port Harcourt.

The electoral commission is investigating the claims of electoral fraud.

Jonathan's PDP has been in power since Nigeria returned to civilian rule in 1999 but is being pushed to the wire by Buhari.

The prospect of a democratic transfer of power -- plus economic woes caused by the slump in global oil prices, concerns about corruption and fears about insecurity -- energised the vote.

Some 348 polling stations had to open again on Sunday to complete the vote, for which 68.8 million people are registered out of Nigeria's population of 173 million.

But election chief Attahiru Jega said the number of affected devices was minimal and the commission was confident of meeting its goal of a "free, fair, credible and peaceful" election.

"We appeal to all Nigerians to remain peaceful as they await the return of these results," he told a news conference on Sunday.

Boko Haram has dominated the campaign, with military operations against the Islamist militants forcing a six-week delay to the scheduled February 14 election.

On Sunday, residents and a military source said soldiers supported by two fighter jets had intercepted militants at Dungulbe village, seven kilometres (four miles) from Bauchi city in the northeast.

A spokesman for the Bauchi state governor said a round-the-clock curfew had been imposed on three areas because of the fighting.

A series of attacks on polling stations in neighbouring Gombe state on Saturday killed at least seven.