We are guided by international standards - Statistical Service 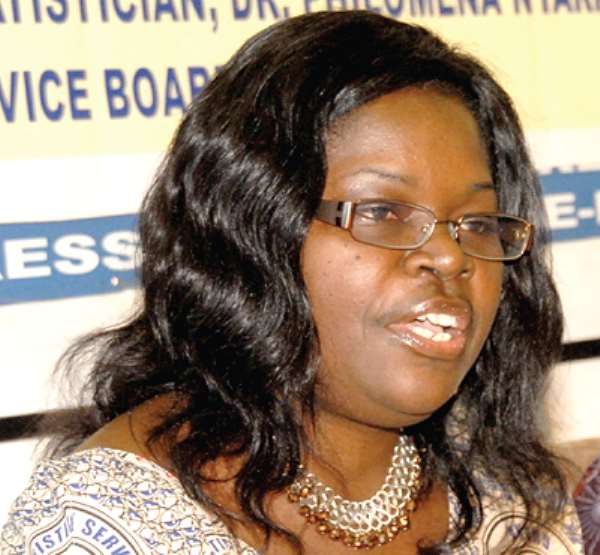 Accra , March 30, GNA - The Ghana Statistical Service (GSS) has stated that it is always guided by internationally acceptable standards, methodologies and best practices in the production and dissemination of credible and verifiable data.

The GSS said it is guided by its core values and ethics, the UN Fundamental Principles of Official Statistics and the African Charter of Statistics to produce data to enhance the formulation and implementation of relevant policies.

The GSS made this statement in reaction to a lecture by Dr Mahamudu Bawumia, in which he highlighted certain flaws in the Gross Domestic Product (GDP) and inflation data compiled by the GSS.

Dr Bawumia, in his lecture queried the overall 2009 non-oil GDP growth rate which was 2.2 percent, whereas agriculture sector grew by 7.2 percent, industry by 4.5 percent and services by 5.6 percent.

The GSS establishes that there was an error during the transmission of the data unto its website, and the correct figure is 4.8 percent, and not 2.2 percent which has subsequently been identified and corrected.

The GSS explains that the method for computing net indirect taxes in constant prices has been revised to align with the recommended treatment outlined in the 2008 system of national accounts and is constant with GSS' revisions policy.

Issues regarding the disparity between the GSS and Ministry of Finance's (MoF) indirect taxes at constant 2006 prices were also raised.

The GSS explained that the figure attributed to MoF was for quarter two of 2014 whilst that of GSS relates to quarter three of 2014.

In the third quarter of 2014, the method for estimating indirect taxes was revised based on the recommended treatment of net indirect taxes and that accounted for the differences in the two estimates said the GSS.

On issues relating to inflation as raised by Dr Bawumia, with regard to the difference in food prices quoted by Ministry of Food and Agriculture (MOFA) and GSS, the GSS stated that   it produces inflation rates for food which include non-alcoholic beverages and non-food, while MOFA compiles information on average food prices only.

Furthermore, the GSS collects prices from fixed outlets in forty-two selected market centres across the country whiles the MOFA on the other hand collects average prices of 24 food items from the ten regional capitals and five other centres namely Techiman, Obuasi, Ejura, Mankessim and Tema.

The GSS added that the coverage and methodologies used by itself and MOFA   differ and do not have a direct correspondence, therefore, statistically they are incomparable.

The GSS established that it has been producing consumer price indices and inflation for the country since 1965 and it is therefore prepared to offer further clarifications to any individual or group of persons on any statistical issue especially issues relating to inflation and GDP.