The Figures Will Always Vindicate Bawumia! 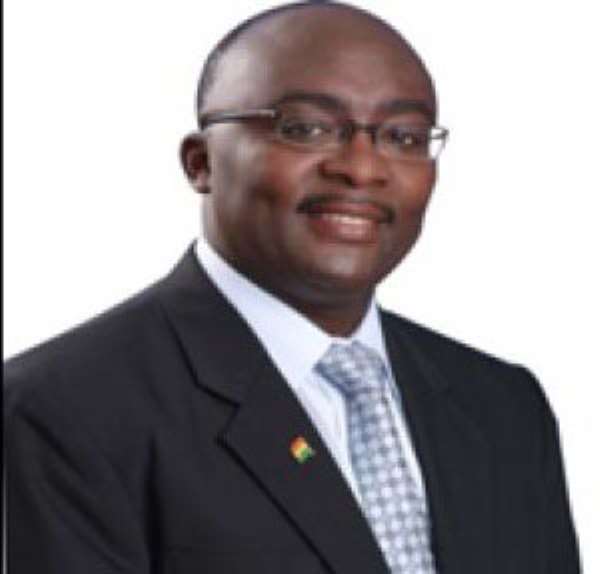 “Your credibility can only be built over time, and it is built from the history of your words and actions.”– African proverb.

Dr Mahamudu Bawumia, Nana Addo's running mate, is in the news again. As usual, it is for all the right reasons. He delivered a lecture at the 4th Distinguished Speaker Series organised by the Central University College on the viability or otherwise of the country's decision to go for an IMF bailout. The lecture was as illuminating as it was frightening.

As they did some time back, his political opponents and detractors have sought to rubbish his lecture. Some have even resorted to insults and name-calling.

But what they refuse to understand is that credibility is not something one buys from the market; it is earned over time. One's sayings and actions over time determine how credible or otherwise one is. When a person has proven that he is trustworthy, as Bawumia has done, it takes more than insults and pure lies to taint the image of such a person.

Kwaku Ananse, the scheming spider in our fables, is known for his craftiness and deviousness. His selfishness is legendary. When a government is known for its lies and deception, like the wily spider, it would take more than propaganda from 'sharp-teethed babies' to polish its already damaged image.

Even though most Asomdwekromanians knew that the mounting debt of the country was problematic, we did not know the extent of the problem until the learned visiting professor at the Central University College made things clearer. Courtesy Bawumia, we now know that the country's yearly debt repayment alone is about seven times the yearly budget of some five ministries put together.  That is frightening, isn't it?

He spoke about government's claims of engaging in 'smart borrowing', and wondered what 'not-smart borrowing' would be. He likened that action to a drunkard who called himself 'a smart drunkard'. That was very apt, considering the fact that the government continues to borrow only to allow its cronies to 'create, loot and share'.

One of the issues that touched the raw nerves of the Zu-za government was the revelation by Bawumia that the country had been sanctioned by the African Development Bank Group (AfDB) for non-payment of debt obligations. But the revelation was swiftly countered by the AfDB which said 'Ghana was current on all its obligations with the AfDB.' The bank claimed an administrative oversight wrongly included Ghana in the list of countries under sanctions by the bank.

Assuming what they are saying is the truth, what about the memo they wrote to the Ministry of Finance on the 18th of February, 2015 titled 'Application of Sanctions' to draw the country's attention to its debt obligations? Is that one too an error? I salute Wofa Abdul Malik Kweku Baako for publicising the memo.

For sure, the bank is only trying to cover up for Ghana. But in doing so, it has ended up tainting its own image as well. It's a big shame!

Interestingly, the Ghana Statistical Service (GSS) has also admitted there was an error in a recent data published on its website.  The GSS said the error occurred during the transmission of the data onto its site. The admission thus vindicates Bawumia's claim that there was something wrong with the GSS figures.

So, you see, after Bawumia's lecture both the AfDB and GSS have come out to admit to one error or the other. But I still could not stop wondering if the so-called errors would ever have been admitted had Bawumia not exposed them.

Meanwhile, Zu-za communicators continue to jump from one radio station to another with their campaign of vilification and lies. But that campaign would fail because figures do not lie.

I know Bawumia is not perturbed by the name-calling and assassination of character. I believe he would continue to speak the truth, no matter whose ox is gored. Posterity would judge him better.

Some of us have lost hope in this great country because of the hopelessness under this hopeless government. But it is the likes of Bawumia who give us a glimmer of hope that there is light at the end of the tunnel. So he should hold on firm.

As Dr JB Danquah once said, 'It is the love of my country and the desire to bring the sweets of higher standard of living to my own countrymen which keep me in politics, despite the abuses of stupid people who think that to be stupid and allow oneself to be misled by clever rogues is better than following a man who tells the truth, even when the truth will make him unpopular.' I believe it is the same motivation that drives Bawumia.

I therefore urge him to continue bringing out the uncomfortable truths. He should continue to sneeze because the propagandists catch cold whenever he does so. Dr Figures, keep the fire ablaze because figures do not lie.