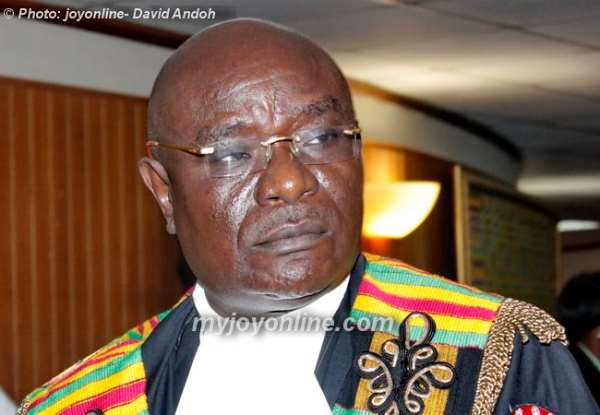 As Christians the world over celebrate Palm Sunday; the triumphant entry of Jesus Christ to Jerusalem, Speaker of Parliament, Edward Doe Adjaho is calling for a solution to the impasse between tie Evangelical Presbyterian (EP) Church of Ghana and the Global Evangelical Church.

The feud which led to the breakaway from the EP church by the Global Evangelical church, arose when the church attempted to amend its constitution to allow the moderator then to serve without time limit.

In an interaction with the newly elected moderator of the general assembly of the EP Church, Mr Doe Adjaho charged him to ensure collaboration with the Global Evangelical Church to ensure peace and unity with the church.

He expressed his hopes that areas of collaboration could be established between the two churches, even if their talks do not result in physical re-merger of the churches.

Listen to the Speaker below:
The new moderator of the general assembly of the EP Church, Right Reverend Seth Agidi said moves are already underway to bring the two churches together.

“We are far advanced [in our endeavours]” he said, adding that “we have covered many of the hotspots that we have identified”.

He was optimistic that “Hopefully, by God's grace we can have organic stability”.

Rev Agidi emphasised the church's commitment to ensuring sustainability of stability and peace the country has been enjoying over the years.

Bringing up the conflict between Alavanyo and Nkonya. He revealed that the church leadership has scheduled a meeting with the chiefs and people of both areas.