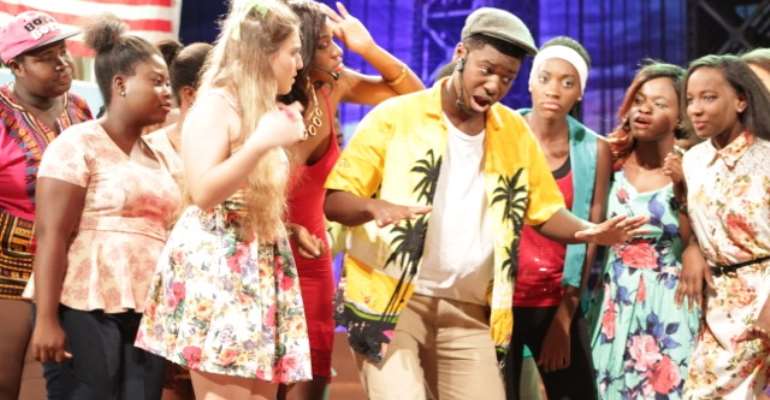 Pupils of the Ghana International School (GIS) were transformed into world class performers as they executed a flawless stage adaptation of Tony Award winning musical 'In the Heights'.

The gripping story of 'In the Heights' explores the lives of young people in the immigrant community of New York City Latino neighbourhood of Washington Heights. Although their parents are relatively poor, they strive with a spirit of resilience to achieve their dreams and aspirations of being successful.

The 80 students drawn from Form One to Lower Six showcased amazing acts interpreting individual characters like professionals to the joy and amazement of parents, colleagues and invited guests. The confidence and passion of the students were obvious as they showed amazing presentation skills in the musical which was interlaced with incredible multicultural music and dance.

The audience were overwhelmed and cried for more of the entertainment packed show which was held at the National Theatre. The production was marvelous with a brilliant setup to mimic what the writer, Quiara Alegria Hudes described in his original script. The lighting and sound were excellent with outstanding costume to make the show superb.gis-students

Acting Principal of GIS, Dr. Mary Ashun was pleased with the success of the programme when she spoke with XFM's David Apinga in an interview.

She articulated that the school is creating a balance in the curriculum for students to showcase their talent in the arts, music and drama. She says parents tend to place much emphasis on Mathematics and Science but the Arts are equally important.

This year marks the 8th year since GIS started its annual musicals with several classics like 'Aida', Annie', 'The Music Man' and 'Sound of Music' being a few that made headlines in the past years.

According to Dr. Mary Ashun, the school decided to vary the choice of musical this year to something modern hence 'In the Heights'.

“We thought of looking at something contemporary. So we decided to do this one because it's so youth oriented with lots of energy in it, with the dancing and singing. Young people will really appreciate that and we have seen it,” the elated Principal added.

Dr. Ashun says funding has been a major challenge. She is calling for more support for the arts to spur students to reach greater heights.

“We are hoping that along the line we will hear a couple of them taking this further outside of Ghana. We hope to put up amazing shows like this every single year,” she concluded.

The Director and Board Member of GIS, Mrs. Estelle Appiah had so much praise for the kids. She commended the efforts of the children to put up a master piece. To her, the musical can “help the students to use their energy positively and help unearth talents”.

The Production Director, Mr. Selasie Dzakamani explained that the programme was meant to develop the potential of students. According to him, most of the kids have learnt invaluable skills that will help them in various aspects of their lives.

“The confidence that they can really do it is very important, they learn how to work as a team and they do most of the work by themselves. As directors we only facilitate the ideas the students develop,” he stressed.

He applauded the students for their commitment throughout the three month rehearsal period and showed appreciation for the excellence that was exhibited by the children.

Lower Six pupil George Obafemi says it was first challenging but he built up the confidence to warm into the character of the proud father, Kevin Rosario who will go heaven and earth to support his family in the musical. He has ambitions to be a Computer Scientist and the musical has further stirred up his childhood passion of singing.

Lucille King, another Lower Six girl who played Nina in the musical says she has not been sure of what she really wants to do in the future. Several things catch her attention but the musical has given her the option to explore acting as a career.

She says the response from the audience when she was on stage gives her so much confidence that makes her feel she can conquer anything in the world.

“Doing this is a big task and I believe I can do anything. At the beginning it was tough but when you get in it becomes easy. I am looking up to doing more as long as it does not interfere with my academics. This event builds up the talent in children and it should be encouraged,” she said.

A parent who shared her view with the press noted that: “The event was perfect, awesome, well done. Vocals and characters were incredible. It's not only about academics even though it is good for them. It makes you stronger, gives you confidence and unleashes talents the children didn't know about. So I think it's a great opportunity with the help of the teachers and the drama group”.