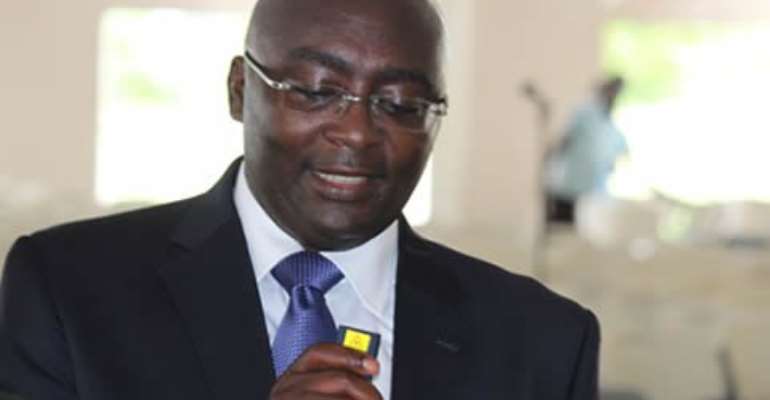 The Finance Ministry is demanding an immediate retraction and apology for what it says are false and reckless statements made about the economy by Dr. Mahamadu Bawumia, the New Patriotic Party (NPP) running mate for the 2016 elections.

The celebrated Economist had alleged at a lecture last Tuesday that Ghana's government submitted wrong data to the International Monetary Fund (IMF), warning this could affect the success of a 3-year programme the country is seeking from the Bretton Woods institution.

The AfDB has since denied blacklisting Ghana for nonpayment of debts.

"I expect Dr Bawumia to come and apologise to the nation because strongly my worry is that some of the comments that he's made, describing the Ministry of Finance as smart drunkards, are unfair", Mr Forson said.

A day after Dr Bawumia's statements on Ghana's indebtedness to the AfDB, the continental bank stated: "On 18 February 2015, due to an administrative oversight, Ghana was erroneously included in the list of countries under sanctions by the AfDB. However, the error was detected that same day and a corrected list was immediately issued in replacement".

However, the Finance Ministry says Dr Bawumia could have done a better job by cross-checking his facts before putting out the statement.

"He [Dr Bawumia] has a responsibility to cross-check facts before he put them out there. And the fact that he did not cross-check those facts he hasn't done well. He's caused a lot of concern particularly in the investor community; he's caused a lot of panic in the financial market and he has to come and apologise", Ato Forson stated.