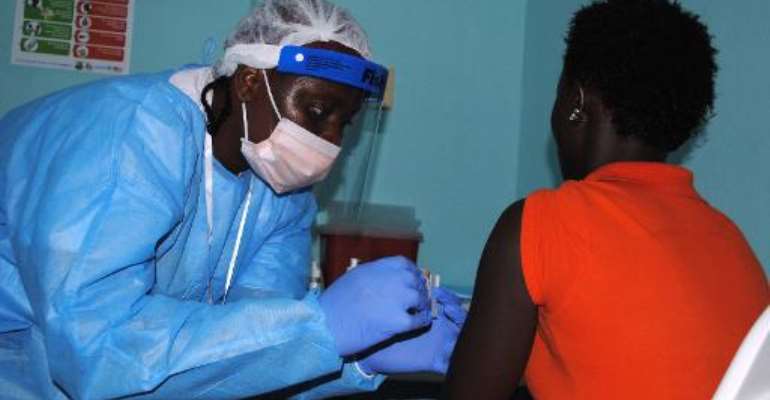 An adhesive bandage is placed on the arm of a volunteer after she was administered an experimental Ebola vaccine at Redemption Hospital in New Kru Town, a suburb of Monrovia, on February 2, 2015. By Zoom Dosso (AFP/File)

Monrovia (AFP) - A Liberian woman who last week became the country's first Ebola patient in more than one month has not passed on the infection to anyone else, a senior official said Wednesday.

The case was a setback to hopes that Liberia, once the worst Ebola-hit country, would soon be officially declared free of the deadly disease.

"The patient is in a stable condition. She is responding to treatment," said Francis Karteh, the head of Liberia's Ebola Incident Management Team.

"She had contact with more than 50 people. We have been following these people and they are all home with no sign of Ebola yet."

The woman is the wife of a cured Ebola patient, a source said.

Liberia has recorded more than 4,000 Ebola deaths but was at an advanced stage of recovery, expecting to be declared Ebola-free by mid-April before the latest case in the capital Monrovia.

During a visit to the JFK Hospital in Monrovia, the largest in the country, Liberian President Ellen Johnson Sirleaf "thanked God" that only one person had been identified so far, an official statement said.

"So far, we're very pleased with their response and the ability to contain the virus," the statement said quoting Sirleaf as saying on Monday.

Since the outbreak began in December 2013, 24,753 people in nine countries have been infected with the virus, and 10,236 of them have died, according to the latest figures.

All but 15 of those deaths have occurred in Liberia and its neighbours, Sierra Leone and Guinea.

But the tide seemed to have turned in Liberia, which six months ago was reporting more than 300 new cases a week.

The World Health Organization (WHO) announced earlier this month that no new case of the deadly virus had been registered in Liberia since February 19.